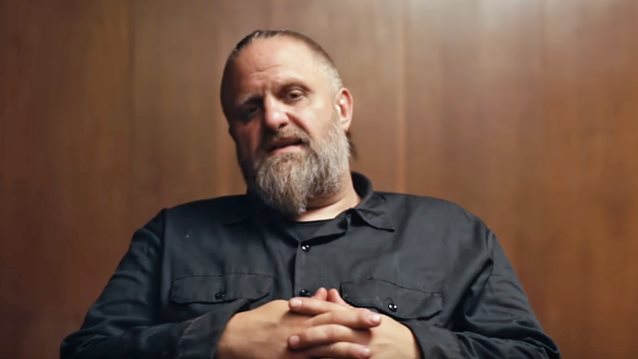 SHAWN 'CLOWN' CRAHAN On Next SLIPKNOT Album: 'Right Now We Have A Lot Of Material'

Shawn "The Clown" Crahanspoke to"The MetalSucks Podcast" about the possibility of SLIPKNOT recording a double concept album in the vein of PINK FLOYD's "The Wall" and THE BEATLES' "Sgt. Pepper's Lonely Hearts Club Band".

Asked if he would personally prefer to release two separate albums at the same time or just unleash two hours of new music in one package, the percussionist said: "Don't hold me to this, but if I had my own way — which I don't, but I've got a big say — I would do two records that would come out the same time, but there would be no more than nine songs [per album] and [each] album would be under an hour, if not under fifty minutes."

He continued: "I was fortunate enough to work with [producer] Rick Rubin on [SLIPKNOT's 2004 album] 'Vol. 3: (The Subliminal Verses)', and he and I got in an interesting conversation about what it takes to make a phenomenal double album, and the first thing he said was about seventy-five songs — to be able to whittle it down to the best. I never forgot that. And right now we have a lot of material — a lot. It doesn't mean a lot of finished material, but we have a lot of material because of the experience we went through last album. So I'm hoping we'll get a lot of material, whittle it down to the best eighteen [songs] and keep it under an hour [per album]."

According to Crahan, a SLIPKNOT double album would be unlike a lot of other two-disc releases in that it would be free of any unnecessary interludes and instrumental filler sections just to balloon the concept to a full-length record's length requirements.

"I don't want to make something arty-farty where it just has the liberty to move around and you get all these segues and little art pieces," he said. "Fuck that! I wanna get busy. I wanna kick you in the face and in the nuts on album A, nine songs, and then you put on album B, nine songs, and it's all over before you could even imagine.

"In the old days, you had to put out fifteen songs anyway; you couldn't even go make your record with a label unless you can give 'em a demo of fourteen to twenty songs — period," he explained. "But I'm not gonna push a second album unless it's there."

SLIPKNOT's touring cycle in support of 2014's ".5: The Gray Chapter", ended in November, with singer Corey Taylor returning to his other band STONE SOUR this year.

Shawn said that SLIPKNOT fans shouldn't expect to see any new music from the band for quite some time.

"I haven't really talked to Corey in a while and I'm not going to for a while. He's doing STONE SOUR. When he gets done with that, he'll share with me what his trip is. And then we'll see if his trip and my trip and Jim's [Root, guitar] trip and Mick's [Thomson, guitar] trip all can work together, and then we'll have a plan. But I'll be honest with you — we won't start with an idea of doing a double album; we'll just work, work, work, work, and a bunch of songs will show themselves. And if there would happen to be eighteen songs, I would really motivate for a double album."

Crahan insisted that Taylor's involvement with STONE SOUR isn't the only reason SLIPKNOT is taking a long break before hitting the studio to record the follow-up to ".5: The Gray Chapter".

"Guess what — I need the time off," he said. "Today is the last day I would ever want to redo a mask or artwork. I need time, man. I toured for three years. At the end of it, my father-in-law died. My front-of-house engineer has passed away, who was with us for fifteen years. The last thing I wanna do is get on the road with SLIPKNOT and try to recreate something. We need time.

"Corey's written a record [with STONE SOUR], recorded a record, and he's out supporting it," Crahan continued. "When he's done, we'll all get back, we'll all take a deep breath and we'll be ready, and it'll be business and art as usual, just the way you like it."

In a recent interview with Metal Wani, Taylor spoke about a possible musical direction for SLIPKNOT's next album, saying that nothing has yet been decided. "I know I wanna write something violent, to be honest," he said. "I wanna do something that feels uncomfortable. I wanna go somewhere where we haven't been in a long, long time. I don't know what that means, but I think when I hear it, I'll know what it is."

A new SLIPKNOT film, documenting the Iowa band's first-ever visit to Mexico in December 2015, will be premiered in more than a thousand screens across the world as a one-night-only cinematic spectacle on September 6.

Directed by Crahan, "Day Of The Gusano" features exclusive interviews with SLIPKNOT's members talking about the importance of their fanbase and the band's long-awaited first-ever show in Mexico City.