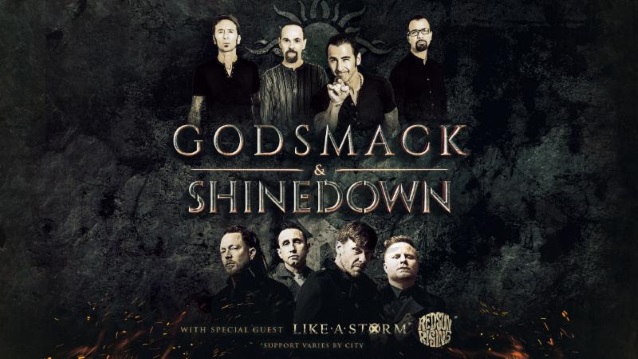 This summer, rock fans across the country should prepare to be rocked hard when the SHINEDOWN/GODSMACK co-headlining summer tour hits more than 30 cities. Produced by Live Nation, the six-week outdoor amphitheater tour kicks off July 22 and make stops in Los Angeles, Las Vegas, Dallas, Atlanta, New York and many more before wrapping September 2. These dates come as both multi-platinum groups are set to release new albums: SHINEDOWN's "Attention Attention" (May 4 via Atlantic Records) and GODSMACK's "When Legends Rise" (April 27 via BMG). Tickets are available to the general public starting Friday, March 23 at LiveNation.com.

Select dates of the summer tour will also be part of the popular Live Nation "Ticket To Rock" program. The "Ticket To Rock" bundle offers fans a low-cost way to see many of their favorite rock artists live in their area all summer long.

"It's all about impact, and making a statement," says Brent Smith, SHINEDOWN's lead singer. "We are creating a show for the fans that is powerful, passionate, and sonically inspiring. The audience has given us a platform to be ourselves, and create something spectacular. That being said SHINEDOWN and GODSMACK will most certainly NOT let them down. This will be the rock and roll event of the year. In other words, 'it's about to get heavy!!!'"

"We really believe this could be a great moment in our band's career and we plan on running on the road until at least fall of 2019," Sully Erna of GODSMACK says. "We love the guys in SHINEDOWN and we all go way back. There is a very strong mutual respect between our camps and we feel that this tour is going to be a must see!" Adds the singer, songwriter and guitarist: "We're preparing ourselves to be on the top of our game!"

The tour will feature two support acts handpicked by GODSMACK and SHINEDOWN. LIKE A STORM will open the first half of the tour with RED SUN RISING performing on the second half.

The SHINEDOWN/GODSMACK summer tour dates are as follows: