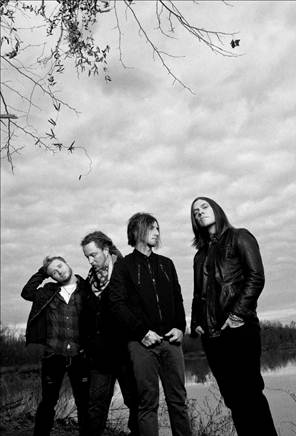 Atlantic recording group SHINEDOWN has announced plans to headline this year's eagerly awaited Avalanche Tour. The North American trek — presented by Zippo and produced by Synergy Global Entertainment, Inc. — gets underway on March 27 at The Grove in Anaheim, California and then continues through late April (see attached itinerary). Accompanying SHINEDOWN on the 2012 Avalanche Tour will be ADELITA'S WAY, with additional support from NEW MEDICINE (March 27 - April 10) and ART OF DYING (April 12 - April 25).

Pre-sale tickets for the second annual Avalanche Tour will be available to members of Shinedown Nation, the official SHINEDOWN fan club, beginning January 31. Additional Avalanche pre-sale tickets will be available on February 1, with all remaining tickets then offered to the general public on February 3 and February 4. During the tour, fans at the show in each market will have a chance to win exclusive backstage passes to meet SHINEDOWN and the other bands by tweeting #ZippoEncore. Additionally, Zippo will give fans onsite a special code that is good for exclusive free music downloads on ZippoEncore.com.

For information and links to purchase all tickets for the 2012 Avalanche Tour, please visit www.AvalancheTour.com.

The 2012 Avalanche Tour celebrates SHINEDOWN's much-anticipated new album, "Amaryllis", which arrives in stores and at all digital retailers on March 27. The album is highlighted by the explosive new single, "Bully", which is available now at all DSPs. SHINEDOWN's first new music since all six singles from 2008's "The Sound Of Madness" ascended to #1 at rock radio, the track is already a top 10 sensation at rock radio outlets nationwide after having immediately been declared the format's #1 Most Added. A companion video clip for "Bully" is currently in pre-production, while an official lyric video is streaming now at SHINEDOWN's official YouTube channel.

Currently poised to begin a major European tour, SHINEDOWN will herald the release of "Amaryllis" with a visit to ABC's "Jimmy Kimmel Live!" Slated for Monday, March 26, the appearance will see SHINEDOWN performing "Bully" live for the first time on national television on the show's outdoor stage (check local listings).

"Amaryllis" sees SHINEDOWN joining forces once more with multiple Grammy Award-winning producer Rob Cavallo (KID ROCK, GREEN DAY),who previously collaborated with the band on the record-breaking "The Sound Of Madness". Recorded at Cavallo's Lightning Sound studios outside of Los Angeles and a pair of Hollywood landmarks, Ocean Way Recording and Capitol Studios, the album was recently named among "This Year's Best Bets" by Billboard, which noted the inventive addition of synths, a 27-piece orchestra, and a 10-piece horn section to the band's powerful hard rock.

"I've always seen SHINEDOWN as its own entity," says SHINEDOWN frontman Brent Smith, "this living thing that's been growing and developing and evolving over the past 10 years. During the recording, the vision of what SHINEDOWN is and where it's going became completely clear. 'Amaryllis' is the manifestation of that vision, the centerpiece of what SHINEDOWN is. It reflects on everything we've done and where we're heading. It's a message of empowerment, perseverance, and inspiration that I think speaks to fans that have been with us since the beginning as well as those who are just learning about who we are and what we're about. I can't wait for the world to hear it."