SHINEDOWN Announces Spring 2022 Tour With THE PRETTY RECKLESS And DIAMANTE

SHINEDOWN has announced its second headlining 2022 North American outing, "The Revolution's Live Tour", with special guests THE PRETTY RECKLESS and DIAMANTE. Kicking off April 1 in Spokane, the 24-date trek, produced by Frank Productions, will see the acclaimed quartet, hailed for its high-octane live shows, travel throughout the U.S. with stops in Boise, Green Bay, Des Moines, Baltimore, Columbus, Wichita, Birmingham, Greensboro, and Nashville, among others, before wrapping in Knoxville on May 7. Later in May, SHINEDOWN will head to Daytona Beach for Welcome To Rockville 2022 where they'll perform Saturday, May 21 alongside GUNS N’ ROSES and RISE AGAINST.

"The Revolution's Live Tour" will follow the band's winter tour, "Shinedown Live In Concert", where SHINEDOWN will bring its exciting live performance, backed by their eye-popping production, back to arenas for the first time since 2020. The upcoming 22-date outing will travel throughout the West Coast, Canada, and more, stopping in such cities as Los Angeles, Phoenix, Denver, Las Vegas, Seattle, Calgary, Toronto, and Montreal. POP EVIL and AYRON JONES will support on select dates; tickets are on sale now. After taking over North America, SHINEDOWN will move their live set across the pond next summer for a European run featuring festival appearances at Rock Im Park and Rock Am Ring in Germany, Download festival in the U.K. and Hellfest in France along with select shows with IRON MAIDEN.

New SHINEDOWN tour dates with THE PRETTY RECKLESS and DIAMANTE:

SHINEDOWN has completed recording and mixing its seventh studio album for an early 2022 release. The follow-up to 2018's "Attention Attention" was recorded in part at a new studio in Charleston, South Carolina spearheaded by the group's bassist and producer Eric Bass.

This past August, singer Brent Smith said that the first single from SHINEDOWN's seventh studio album would arrive in January 2022.

SHINEDOWN's film "Attention Attention", a cinematic experience of the band's 2018 studio album of the same name, premiered worldwide in September. 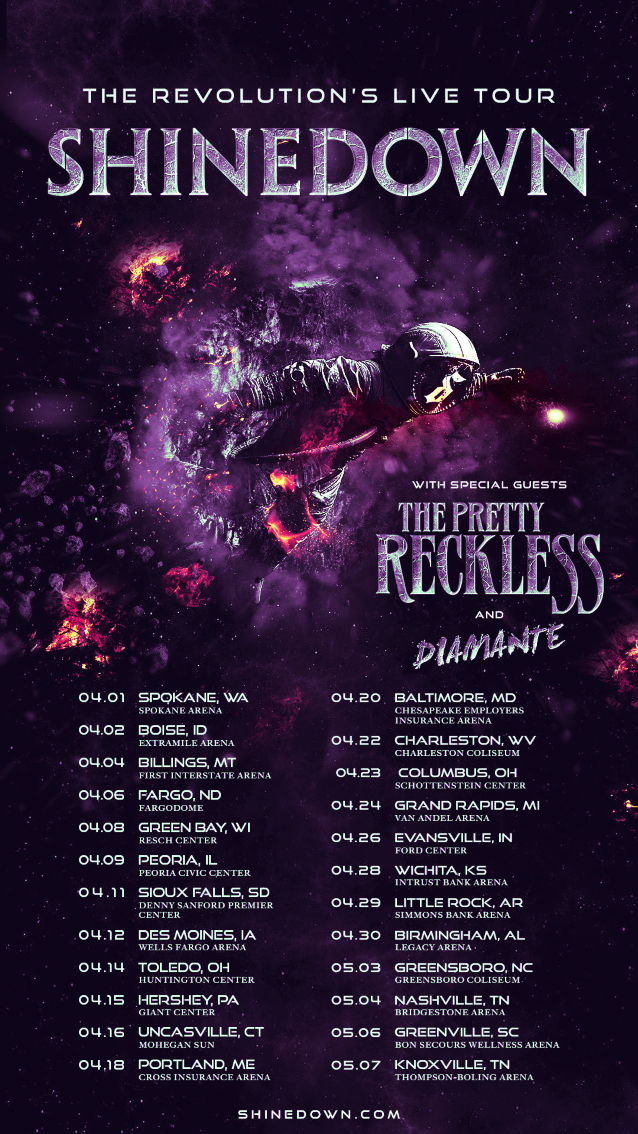