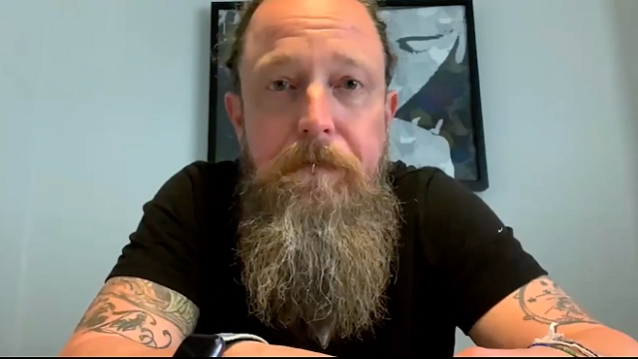 SHINEDOWN drummer Barry Kerch has tested positive for the novel coronavirus after being vaccinated.

The 44-year-old musician, who lives in Jacksonville, Florida, revealed his positive diagnosis in a video message earlier today.

He stated in the clip (as transcribed by BLABBERMOUTH.NET): "In the 20 years of SHINEDOWN, I have never missed a show — until now. I regret to say that I, unfortunately, during rehearsals, contracted COVID. And before you get all crazy on me, I got fully vaxxed in April. I followed all the rules — wore masks, washed my hands, et cetera. Unfortunately, I'm one of those ones that got it even though I was vaxxed. So, unfortunately, I'm still testing positive. I'm quarantined. My health is good, which is good news. I've had symptoms, but I'm okay, and I will be okay. But until I finish my quarantine and test's negative, I'm stuck in these four walls. I can't risk it for my band and my crew; they're all doing fine."

He continued: "That being said, woe is me — move on. The shows are still gonna happen. Our good friend Dustin Steinke — I remember him from a wonderful band called SIXX:A.M. — he's gonna be filling in for me. And he's gonna kick ass, and the band's gonna kick ass. And I'm happy that the shows can continue on. And as soon as I'm healthy and able, I'll get back out there. So that's the news, folks. Till next time."

Kerch, like many others, is showing that while vaccines are exceptionally effective in preventing death and severe illness from the coronavirus and its known variants, some are far from foolproof in preventing infection altogether.

SHINEDOWN is scheduled to play the Mississippi Valley Fair in Davenport, Iowa tonight (Thursday, August 5) before playing seven more shows in August and then returning to the road in early September.