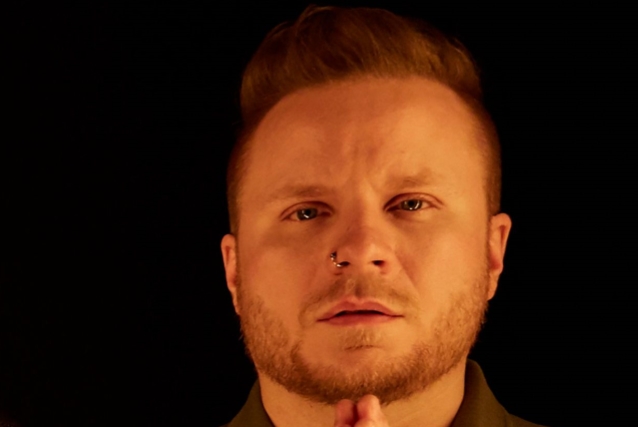 SHINEDOWN guitarist Zach Myers recently spoke with Two Doods Reviews. The full conversation can be streamed below. A few excerpts follow (as transcribed by BLABBERMOUTH.NET).

On the group's new single, "Get Up", the lyrics for which were inspired by bassist Eric Bass's battles with depression:

Zach: "We started writing the same way that we always do, and then basically, when 'Get Up' happened, it kind of opened up this floodgate. SHINEDOWN songs are always incredibly honest, and that's something we pride ourselves on, but in the same breath, I don't know if we had ever written a song this open wound-ish, I would say, about ourselves and about Eric and someone this close to the band. We always write about ourselves, but this felt different. It felt personal in a way to where you were giving up your ambiguity of who you are personally. You always try to make yourself feel invincible in certain ways, but with this, once the lyrics came out, it really felt like it was okay to write about everything. I think this was kind of a starting point of where the record ended up going... Everybody in the band has something that we have to get up from. Not to be cheesy about it, but it's the truth. I think that's kind of where the song came from, and that kind of got the album set on a path where it ended up."

On vocalist Brent Smith's past struggles:

Zach: "He had put on weight in 2008, and all throughout 2010, he was drinking really bad at that point. For us to get through it, it was weird — it was our biggest record, but we weren't doing the biggest business that we were doing at the time. That's kind of where we are now. It's very odd that that's the way it happened, but in the time that it was happening, it all felt good. The darkness for me was in 2006, 2007. 2008 to 2010, he was drinking a lot, and it was a little rough on us because it was kind of watching this thing happen — you're watching the car crash in slow motion. Once 'Amaryllis' happened... 'Amaryllis' was a very dark making of that record, which is [why] a lot of us don't really talk about that much. The making of that record was not fun for anyone involved. It's such a weird place to be. People say great suffering makes great art, but I wish it didn't have to be that way. Before the 'Amaryllis' tour, we were going to sit down and have, like, a 30-minute meeting. We were on our way to rehearsals and we were going to have a 30-minute meeting, and it ended up being, like, a six-hour meeting. It was this kind of METALLICA, 'Some Kind Of Monster', us just kind of like letting everything out and crying and screaming at each other. It was very deep and reflective. It was never malicious... sometimes when you have conversations like that, what will happen is you'll say something about somebody, and then they'll have to come back and go, 'Well, you do this.' It wasn't like that — everybody let people say what they had to say, and then they had their turn to say stuff that they needed to say to you. I think that really was the catalyst. After that, it's been smooth sailing ever since."

On the most difficult aspect of being a touring musician:

Zach: "Being alone is one of those things... it's really good in our band, because we're at a level now that if we wanted to have our own buses, we easily could. The four of us have always rode together, probably always well. We just really like it — it probably keeps it less lonely. We get along — we really like being around each other, but that doesn't change the fact that we have kids and we have wives. Right now, for me, it's rough, because I have a two-month-old, so my wife's not coming out on the road. When she does, though, I'll get my own bus and we'll have a family bus, and it's really fun. Brent will come over and ride my bus, or he's brought out a bus before with his son. [Drummer] Barry's [Kerch] family was just out; Eric's wife was just out. Those are the things that you miss. Watching Barry's family come out for two days and then him have to say goodbye to them... he's got a seven-year-old daughter. Those things are rough, but at the same time, we know why we're doing this. We have fun out here. My wife talks me off the ledge a lot. I'll be really, 'I can't do this anymore.' My wife's [like], 'Listen, you know you're doing this because a, you love it, and b, you're taking care of your family.' She's a saint, so it helps me out a lot."

On bands "finding themselves":

SHINEDOWN's sixth studio album, "Attention Attention", was released May 4 via Atlantic Records. The follow-up to 2015's "Threat To Survival" marks the band's first full-length effort to be produced entirely by Bass.

SHINEDOWN is currently in the midst co-headlining U.S. tour with GODSMACK. The band will then kick off a European tour on October 29.