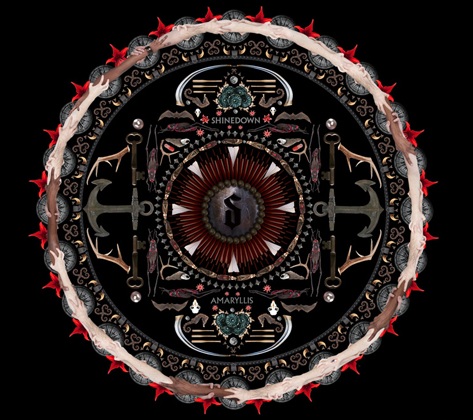 SHINEDOWN's fourth studio album, titled "Amaryllis", is likely to sell between 80,000 and 90,000 copies in the United States in its first week of release, according to industry web site Hits Daily Double. The estimate was based on one-day sales reports compiled after the record arrived in stores on March 27 via Atlantic.

SHINEDOWN landed the biggest debut of its career in July 2008 when its third album, "The Sound Of Madness", sold 50,000 copies in the United States in its first week of release to debut at position No. 8 on the Billboard Top 200. This marked the first Top 10 album of the band's career.

SHINEDOWN performed two songs — "Bully" and "Unity" — on this past Monday night's (March 26) episode of ABC-TV's "Jimmy Kimmel Live!" (which actually aired Tuesday morning). You can now watch video footage of their appearance below.

"Amaryllis" arrived in stores almost four years after the band issued "The Sound Of Madness". SHINEDOWN frontman Brent Smith told The Pulse Of Radio that even though the band really came together on that last effort, they didn't want to rest on their laurels while making "Amaryllis". "We're never really a band that's gonna ever be satisfied," he said. "We're never gonna be complacent with 'Oh, well, that'll do.' We're the band that's looking for the doors that everyone is afraid to find, because we like that. We like pushing the envelope constantly. It keeps us on our toes."

The first single from "Amaryllis", "Bully", has already topped the rock radio charts. The new single is called "Unity".

The release of "Amaryllis" is being accompanied by an e-book called "For Your Sake: Inside The Making Of Amaryllis", a 75-page, "completely interactive" e-book that contains commentary, photos, video footage and other content exclusively chronicling the creation of the new record.

SHINEDOWN is headlining the 2012 edition of the Avalanche Tour, which kicked off on Tuesday in Anaheim, California, with ADELITAS WAY, NEW MEDICINE and ART OF DYING also on the bill.