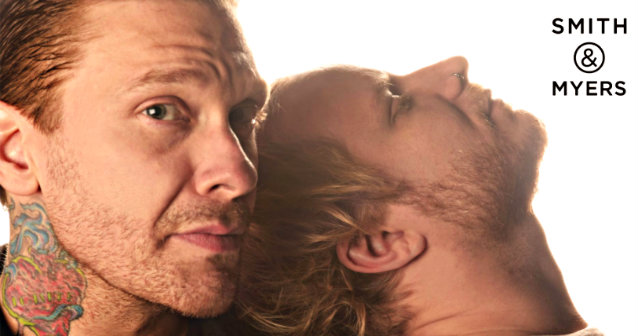 SHINEDOWN's BRENT SMITH And ZACH MYERS To Embark On 'Songs For The Soul: An Intimate Acoustic Evening' Tour

SHINEDOWN frontman Brent Smith and guitarist Zach Myers, billed as SMITH & MYERS, will embark on the "Songs For The Soul: An Intimate Acoustic Evening" tour in early December.

"Zach and I are extremely excited to be bringing the SMITH & MYERS tour to a city near you," said Smith in a statement. "We feel this will be a unique and intimate experience for our fans and what better time to celebrate but during the holiday season. See you at the show!"

The project was initially envisioned as a ten-track album chosen by fans via Facebook. However, four of the songs were held up awaiting clearance, meaning the initial idea was carved in two. The final four tracks eventually saw the light as a follow-up release, "Acoustic Sessions Part 2", which arrived in March 2014.

Smith told Billboard that Anthony Delia, senior vice-president of marketing for Roadrunner/Atlantic, came up with the covers idea and a subsequent plan to chose the songs via a Facebook poll of the band's fans. "They could put in any song they could think of that they wanted to hear me and Zach cover," Smith said. "And, no B.S., I think there was somewhere in the neighborhood of four or five thousand songs submitted from people all over the world. It pretty much crashed our server every single day."