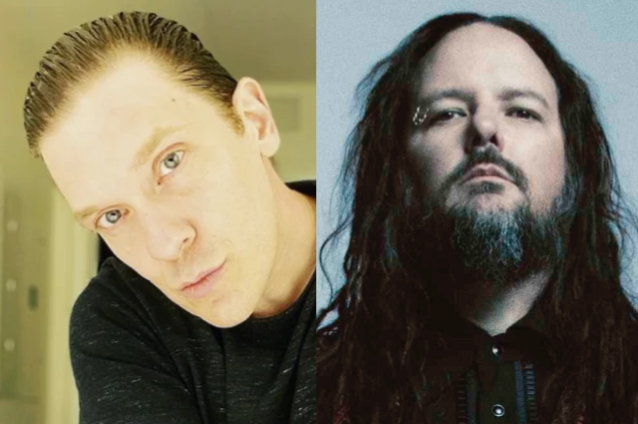 SHINEDOWN's Brent Smith has praised KORN singer Jonathan Davis for returning to the road so quickly after battling COVID-19. Although Davis is no longer contagious with the virus, at KORN's recent shows, he has been taking a seat on a custom throne near the drum riser due to lingering effects of his bout with COVID-19. As a result of his infection, KORN postponed six dates and canceled two on its current U.S. tour.

Smith touched upon Davis's COVID-19 diagnosis during a new appearance on "The Mistress Carrie Podcast". He said (as transcribed by BLABBERMOUTH.NET): "That dude is necessary. Point blank. That guy has my absolute respect. Look, we all know what's going on here. Obviously, he got an infection. He got cleared to go back to the road. We actually just posted something about him the other night on our Instagram on SHINEDOWN, just telling everybody in Shinedown Nation and around the world, 'Send all your love and your positive energy and your healthy vibes and your healthy energy to Jonathan.' Because look, man, he doesn't wanna cancel shows. He has shedded the virus, but he's chosen to go out there and perform for people because he doesn't want to cancel the shows.

"But on the other side of that, you've really gotta look at the fundamental side from a medical point of view and a scientific point of view," he continued. "I'm not a medical doctor, I don't think Jonathan is either, but at this stage in the game with this virus, 20 months into it, we know for a fact that what you can't do is if you do get an infection or you do have a breakthrough infection, even if you're vaccinated, you've still gotta continue to take care of yourself. And sitting around and not being active — you've gotta exercise, you've gotta eat right. You need to be going to the doctor and making sure you're getting six months to a year physical. For Jonathan, he's out there because he's, like, 'Yo, I've got it. I got through it. I'm negative now. I've shed the virus.' But he's got some long-haulers syndrome that we don't think he's gonna be dealing with for too much longer because he's choosing not to sit around either. He's, like, 'I'm gonna get back out here.' He's not a risk to anybody. He's out there playing shows to get his blood moving, to get back into what he's doing. If it takes him a few shows sitting down here and there, then so be it. But the guy's not punking out either. He's out there with the fanbase that are there to see him and they're supporting him. And I support him as well."

In video footage of KORN's August 27 concert in Tinley Park, Illinois — Jonathan's first gig back after revealing his positive diagnosis — he could be seen walking slowly around the stage, coughing and appearing to take a minute to catch his breath. According to TMZ, Davis also took occasional hits from an oxygen tank set up near this throne.

SHINEDOWN has spent the last few months recording its seventh studio album for an early 2022 release. The follow-up to "Attention Attention" is being recorded at a new studio in Charleston, South Carolina spearheaded by the group's bassist and producer Eric Bass.