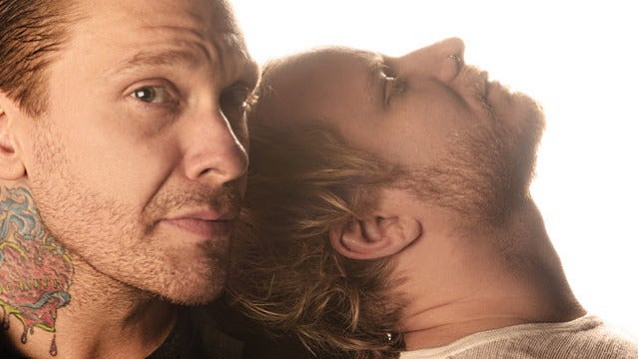 SHINEDOWN frontman Brent Smith spoke to 104.9 The X radio station about the forthcoming album from SMITH & MYERS, his collaboration with SHINEDOWN guitarist Zach Myers. Regarding what fans can expect from the follow-up to 2014's "Acoustic Sessions" EP, Brent said: "It's not just every song on acoustic and a vocal. There's a bit instrumentation that's going into this. Also, it's a double album. So it's 10 covers that were really picked by the audience. We allowed the audience to submit as many songs as they would like to hear me and Zach perform. Because if you go back to 2014, we did the first SMITH & MYERS, but that was for the fans. We did these two EPs, five songs apiece. They were cover songs that the audience picked. And we put it out, and, honestly, we never really thought anything from it, when we released it, but there was such a demand for it that we decided to give it a shot and try to tour it and see if anybody would come out. To our shock, a lot of people came out. And so we decided with this project that we were gonna go for it and kind of go a bit more in-depth with it."

He continued: "So there's 10 original SMITH & MYERS songs for the very first time, and then another batch of 10 songs that were really submitted by the audience that we looked at the percentages of everything and we picked the 10 that we felt like people really wanted to hear. And we're in the mastering process of it right now. We're in the home stretch of getting it prepared for the audience and for the world, and you're gonna see some brand new news to come very, very shortly about when that's gonna be coming out."

Late last month, SHINEDOWN's 2012 song "Atlas Falls" arrived on digital services, after being available since March only as part of a charity T-shirt bundle sold through the band's merch site.

One hundred percent of the proceeds from the bundle, totaling more than $300,000, has already gone to non-profit medical supplier Direct Relief. The band also donated $20,000 of its own money. Direct Relief supplies healthcare workers with crucial protective items and equipment.