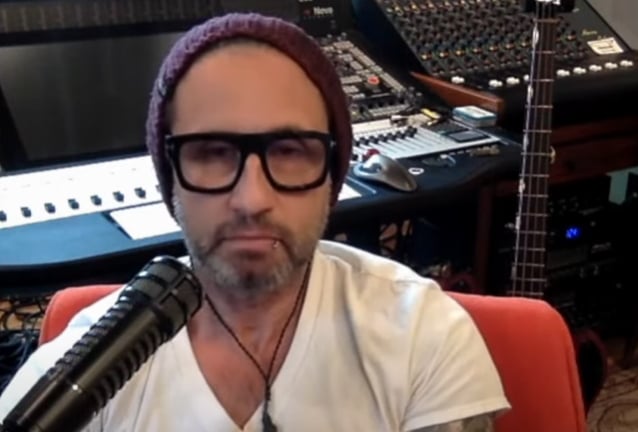 SHINEDOWN's ERIC BASS: 'We Have To Find A Way To Have Real Tolerance For Each Other'

SHINEDOWN bassist and producer Eric Bass spoke to Bass Musician Magazine about the lyrical inspiration for the band's latest album, "Planet Zero". He said (as transcribed by BLABBERMOUTH.NET): "When we writing, it was in the middle of the pandemic. We started writing in July of 2020 — June or July of 2020; I forget when it was. But it was also right in the midst of the George Floyd riots and all of the upheaval that was going on. And I just started calling America 'Planet Zero.' I was, like, 'We have zero tolerance for each other. We have zero sense. There's zero ability to communicate.' And so I just kind of nicknamed it 'Planet Zero.' And we decided to write about Planet Zero — a potential future; we kind of turned it into an actual planet and where we felt like we were headed. And that song itself is actually more geared toward cancel culture and shutting down each other's speech and thought because we don't agree with it."

"I don't have to agree with you to love you. I don't have to agree with everything you say. I can think that you're vastly wrong about something and we should go into our interactions with each other with love for each other as human beings. And so with 'Planet Zero', if we stop thinking that way and we let other entities kind of take over the way we think and how we process… Again, it seems to be something that gets talked about a lot these days, but Big Tech and media and that sort of thing, just kind of telling everybody what to think. We're like cats with a laser pointer, like, 'Today you should be concerned about this over here,' and then 'Tomorrow you should be concerned about this over here,' and really dividing us into left and right, into racial pockets that we should only live here. It's sort of the antithesis of how I feel like I was raised and the antithesis of how I feel like my generation thought about things when I was younger, because we were all about, 'Don't see color. Don't see each other's different groups.' We were all united; it was this 'united world' thing that was happening, and now it seems like we're going in the opposite direction.

"So, with 'Planet Zero', it's a look at a potential future in a dystopian kind of way, if we continue to let these things happen and let 'Big Brother', for lack of a better term, in an Orwellian sense, make decisions for us and tell us what to think and what to do and what we're allowed to do and say," Eric added. "And again, I think that's also the antithesis of what America is about."

Last week, SHINEDOWN released a brand-new Amazon Original of the band's current hit single "Daylight", available now only on Amazon Music. The track is a complete re-imagining of the song that changes up the chord progression and tempo and injects big drums and an aggressive distorted synth guitar tone that balance against the beauty and softness of the verses and chorus.

"Planet Zero", produced by Bass, is out now via Atlantic Records. The album debuted in the Top 5 on the Billboard 200 chart and the official U.K. albums chart, and at No. 1 on six other Billboard charts, including Top Album Sales, Rock, Hard Rock and Alternative Albums.