SICK OF IT ALL: New Song 'Road Less Traveled' Available For Streaming

New York hardcore veterans SICK OF IT ALL will release their new album, "The Last Act Of Defiance", in Europe, Australia and New Zealand on September 29, and in North America on September 30 via Century Media.

A song from the CD, "Road Less Traveled", can be streamed using the SoundCloud widget below.

Asked what he wants fans to walk away with after hearing "The Last Act Of Defiance", SICK OF IT ALL drummer Armand Majidi's answer is very simple: "I want them to feel that they just heard a hardcore record that has everything, from blistering speed to bouncing groove, to heavy and pounding to bright and melodic."

The eye-catching cover artwork for "The Last Act Of Defiance" was created by Ernie Parada, who has already designed posters, merchandise and album art for numerous bands and artists from the punk and hardcore scene such as HATEBREED, PROPAGANDHI, RANCID and THE GASLIGHT ANTHEM.

Stated Majidi about why Madsen is the perfect match for SICK OF IT ALL: "Not only do we get along famously, but he has always understood how to capture the band’s intensity in the quietly controlled, less-than-intense studio setting.

"It was always difficult for us to find an engineer who could capture our live sound before meeting Tue, so now that we’ve found him, he’s our guy.” 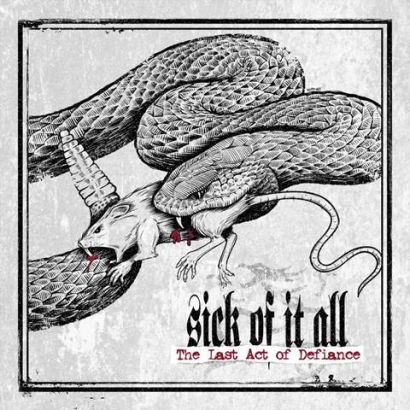