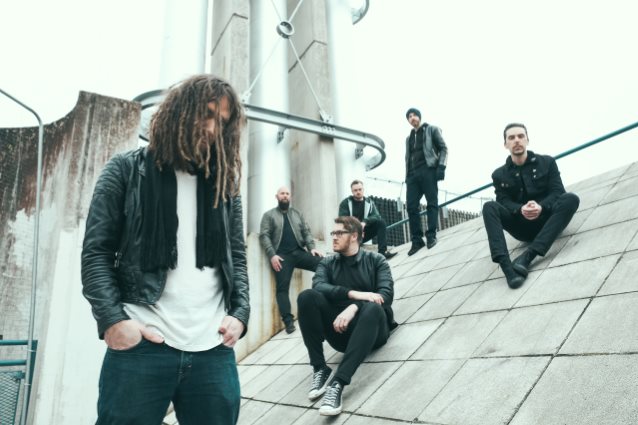 The long-awaited new full studio album from SIKTH, "The Future In Whose Eyes?", was released earlier this year. The record found the band venturing into new musical territories and exploring new possibilities and was the first SIKTH album to feature a guest vocalist.

After being invited to join PERIPHERY on a U.S. tour in the summer of 2016, vocalist Mikee W Goodman and PERIPHERY singer Spencer Sotelo began to hatch a plan that would lead to Sotelo travelling to the U.K. to record the song "Cracks Of Light" with Goodman at R&R Studios in Uxbridge.

Summer 2017 saw PERIPHERY touring in the U.K., and the chance for Mikee not only to perform with PERIPHERY during their London headline show, but film Sotelo for the video for "Cracks Of Light".

Goodman recalls the shoot: "I met up with Spencer in Manchester and we literally found a cloak room, put a white sheet up, and got the shots. Very DIY, but it looks great! I think it came out really well, the black and white vibe is cool."

Goodman states about the reaction to the song: "I have had a lot of positive messages from fans thanking me for the lyrics in this song, actually. 'Cracks Of Light' is a dark song but it does have a positive message. Inspiration comes from my own battles with depression and trying to find light through the darkness. Some days people have to go through such sadness to find the happiness. People learn a lot more about themselves in certain situations like this."

SIKTH is set to play summer festivals in August in the U.K. and Czech Republic.