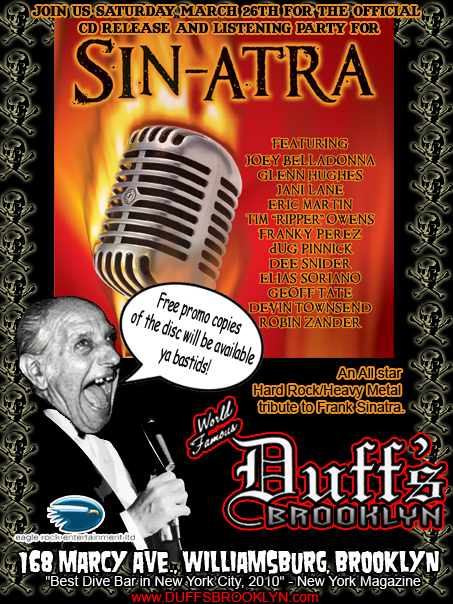 The official release/listening party for "SIN-atra", heavy metal's tribute to the genius of Frank Sinatra, will be held tonight (Saturday, March 26) at Duff's Brooklyn in Williamsburg, Brooklyn.

Twelve songs made famous by Ol' Blue Eyes are given a radical and individual new treatment from some of the finest voices in rock including members of ANTHRAX, TWISTED SISTER, DEEP PURPLE, QUEENSRŸCHE, MR. BIG, WARRANT, NONPOINT, STRAPPING YOUNG LAD, KING'S X and CHEAP TRICK with the backing of a superb band led by guitarist Bob Kulick (KISS, MEAT LOAF). The songs are known to everyone but you've never heard them quite like this before!