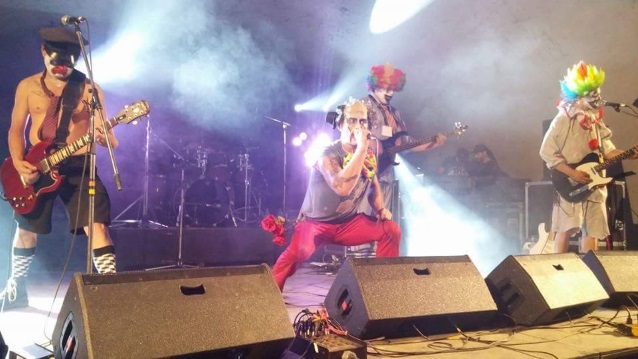 Singer For IRON MAIDEN Cover Band POWERCLOWN Charged With Smuggling $5.5 Million Worth Of Drugs Into Japan

According to Global News, the singer of POWERCLOWN, a Canadian IRON MAIDEN tribute band that wears clown makeup, was arrested in Japan last month after more than $5.5 million worth of stimulant drugs were found in his guitar case.

Daniel Burton Whitmore, who goes by the stage name Dicksie Di'Anno, had just gotten off a plane from Vancouver to Narita International Airport on December 11 when he was arrested.

Japan Today reported that customs officers became suspicious of the 44-year-old musician when they noticed him sweating profusely, and because his guitar case seemed unusually heavy, prompting them to carry out an X-ray examination of his belongings. The approximately 9.8 kilograms of stimulant drugs were discovered concealed inside his guitar case and multiple tea canisters.

Whitmore reportedly said he agreed to carry the drugs for someone else because he needed the money.

Japan is notoriously tough on drug smugglers, with convictions in similar cases coming with prison sentences of 10 years or more and hefty fines.

Whitmore's POWERCLOWN bandmates have commented on his alleged actions, writing in a Facebook post: "All we can do is hope for the best for him. While none of us clowns condone Dicksee's actions, or recommend anyone else attempting something this foolish, we do hope for the best for our grease-painted pal. We hope that by some small... make that large... miracle, he somehow manages to slide into his cock-pink pants and dance himself back home to face this different form of music he has created for himself. We love you, Dicksee. If you somehow make it back here, and we hope you do, we may even go easy on you. Maybe. No promises."

In regards to certain legal actions taken against a certain member of one of my clients, Powerclown, I hereby release...

Posted by Powerclown on Wednesday, January 3, 2018