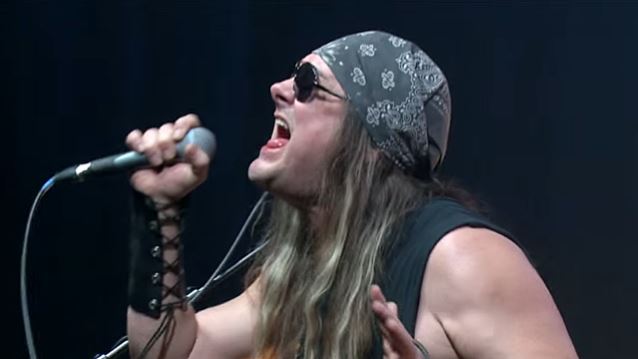 Singer Johnny Solinger has announced his departure from SKID ROW. He says in a statement: "I have decided to leave SKID ROW to pursue my solo career. The past 15 years has been a great experience and I have appreciated the opportunity to be the lead singer in one of the most prominent bands of the 1990s and share stages with the likes of AEROSMITH, BON JOVI and KISS, performing in front of millions throughout the world. I wish SKID ROW the best of luck in their future pursuits."

Asked about former SKID ROW frontman Sebastian Bach's constant calls for a reunion of the band's classic lineup, Solinger told SROMaginc.com last fall: "Well, it's really a non-issue. It's so long ago, and it's not gonna happen, so… I can't speak for him. I really don't ever talk about the old regime. This is gonna be my fourth record with the band. So it's just a non-issue. It's not even a topic. It's whole different world. It's been a decade and a half. So that speaks for itself."

Bach said he wanted to write the letter in response to Solinger's interview in which Johnny said a tweet by Bach about a possible SKID ROW reunion was an attempt to "get attention."

Pressed by Revolver magazine on why a SKID ROW reunion hasn't happened yet after he spent the past few years "teasing" it, Bach said: "I wasn't teasing. I go onstage every night and I sing my songs. Those are my songs. That's my voice. I'm part owner of the band, but it's not my call."

Asked what caused such bad blood between him and the rest of SKID ROW, Bach said: "I don't even remember. If you put a gun to my head, I couldn't tell you. They're happy doing what they're doing. I think it's an insult to everybody who ever bought a record. But they do the opposite of what the audience wants and they don't care."

He continued: "There should be no way that you're ever playing music unhappy or unsettled. It can't be a miserable experience and we made changes.

"We figured it out that the three of us love making music together. We're proud of the songs that we created together and we wanted to play those songs again. We just wanted to do it with different people, so we did.

"Do you want to hang out with somebody that you just don't get along with? It doesn't make any sense. I want to enjoy life.

"[The latest SKID ROW] EP ['Rise Of The Damnation Army - United World Rebellion: Chapter Two'] was the most fun I've ever had with the SKID ROW record. That says something after doing this for 28 years."

Bolan confirmed to Classic Rock Revisited that SKID ROW was "offered money" to reunite with Bach for a festival appearance or tour. "It's not as much as people would think, but we've been offered money to do it," he said. "I think us not doing it kind of says that it is not about money as to why we are not doing it."

He continued: "I am not patting myself on the back, but with our past success, I have plenty of money. I am more about being happy at what I do.

"As far as everyone pointing the finger at me [as being the main reason there hasn't been a reunion with Bach], that came from one person.

"We are all individuals. If [the other guys in the band] wanted to do it, then I am sure I would have heard about it by now, as they are my best friends. It is what it is, and certain people say certain things, and you've just got to sit back and laugh."

I have decided to leave Skid Row to pursue my solo career. The past 15 years has been a great experience and I have...