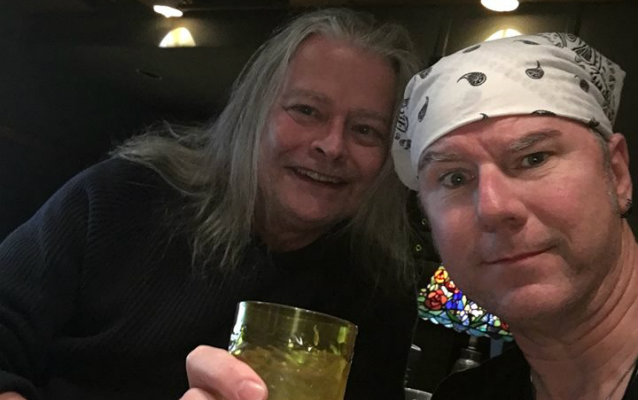 Thomas said in a statement: "It is with great sadness, disappointment, and regret that I must announce that I am withdrawing myself from any involvement with DEVIL'S HIGHWAY. This is due to personal and business differences that are irreconcilable.

"This project started with much promise, magic, and pleasure. Eight years later, it is still unfinished, and the vision that I had for what it could and should have been can no longer come to fruition.

"I thank everyone that was involved in trying to help it get off of the ground, but sadly I believe it never will. If it does, it will be without me.

"I wish nothing but peace, love, happiness, prosperity, and good health to all of the band members."

Thomas recently spent time at Carriage House Studios in the suburbs of Stamford, Connecticut laying down vocals DEVIL'S HIGHWAY's debut album with legendary producer Max Norman, who has previously worked with OZZY OSBOURNE, MEGADETH, SAVATAGE and LOUDNESS, among others.

DEVIL'S HIGHWAY's sound was previously described in a press release as "a mixture of classic metal and hard rock with nods to BLACK SABBATH, ALICE IN CHAINS, vintage SCORPIONS and early OZZY OSBOURNE.

Back in 2014, Thomas had the following to say about the formation of DEVIL'S HIGHWAY: "I met Ralph on tour when ALABAMA THUNDERPUSSY was doing main support for OBITUARY. We hit it off perfectly from day one and have been close friends ever since. On that tour, he played me some songs he was writing and asked if I'd be interested in working on it with him. I immediately said yes, because I thought it was fantastic. After going to Japan with Ralph, Tony and Steve [as the DEATH METAL ALLSTARS], we decided it was so much fun that we should make a real band."