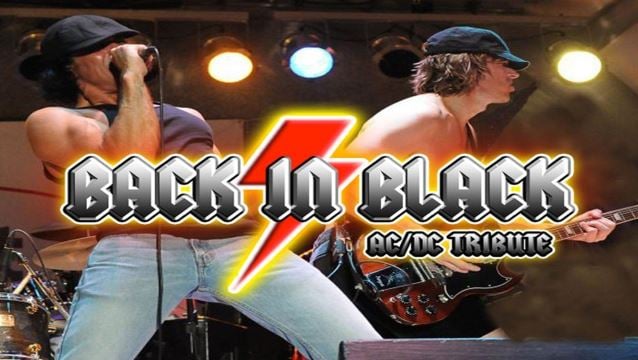 Darren Caperna, the singer of the Dallas-based AC/DC tribute band BACK IN BLACK, spoke with the "Karlson & McKenzie" show on Boston's WZLX 100.7 FM radio station, about losing the AC/DC frontman gig to Axl Rose of GUNS N' ROSES.

Caperna was called by AC/DC to audition during the week of March 14 and immediately flew to private rehearsal studio in Atlanta, accompanied by BACK IN BLACK guitarist Mike Mroz.

Before meeting the band, he was given a soundcheck with the band's tech crew, during which the members of AC/DC also introduced themselves.

"We were [in Atlanta for the audition] right before [Axl]," Caperna said. "We flew in on a Sunday, we rehearsed on a Monday and then we flew out on a Tuesday. And they told us that I did a great job and they loved us."

He continued: "Let me tell you something: They made us feel like we've known each other for years. There was no rock star persona, there was nothing. Angus [Young, AC/DC guitarist] showed up in a jeans and t-shirt, and I hung out and I was drinking tea with them outside while telling stories and talking to each other like we were just hanging out at a studio, singing songs together. And they told us they don't know which direction they're going when we were leaving, but they wanted us to know that we did a great job. The manager came and told us the next day at the hotel. So we're sitting there waiting and waiting. The next week comes and we're waiting for the call. And then we see Axl Rose seen at the same hotel we were at in Atlanta, and I went, 'Oh, crap!' We didn't know, but we were kind of, like, 'That can't be a coincidence.'"

He related how before going into "Riff Raff", Angus approached him and said, "I'm warning you in advance that we are still a little rusty on this song!" Caperna still can't believe that Young was actually apologizing to him.

Caperna said that even though he didn't get the job, it was "the experience of a lifetime" that went way beyond their expectations. He said that he's now got a great story to tell his grandchildren, as well as his guitar students at For Those About To Rock School in Southlake, Texas.