The band says in a statement: "We know this may come as a surprise to many of you; honestly, it kinda took us by surprise too. What was supposed to be a short eight-week break suddenly and unfortunately turned into the demise of the band.

"We have been touring and recording in a relentless schedule since 2008 and I guess we burned the candle in both ends and hit a wall. When we finally had the opportunity to step back and get some perspective, the motivation for some members in the band just wasn't there anymore…

"[We] would like to take this opportunity and thank our beloved road crew, Victory Records, Danger Music, Artery Foundation, TKO and all other great people and companies we worked with these past seven years as a professional touring act. Most of all, we would like to thank YOU; our dedicated, devoted, loving and caring fans around the globe! We've truly been blessed to be able to travel the world and meet so very many of you Sinners. Together we managed to sell tens of thousands of albums and achieve what most young bands only can dream of in this day and age. You truly are the sole reason we pushed on for as long as we did and we will cherish the memories forever and never forget your unconditional love!

"It is our hope that the flame will burn once again and hopefully resurrect this Swedish bastard sometime in the future. Time will tell… For now, au revoir."

Earlier this year, SISTER SIN drummer Dave Sundberg told Dead Shot about the band's journey since its inception in 2002: "I'd like to see it as pre-record and after, basically. The first years up until 2008, when we signed with Victory, we just rehearsed, recorded demos, you know. It wasn't really serious or took up any time. After we released 'Switchblade Serenades' in 2008, we have lived and breathed SISTER SIN every minute. We did a lot of groundwork, touring-wise, since 2008 and it been a lot of hard work. We did countless of European and U.S. tours in order to make a name for ourselves and also be able to make a living from off the band. It's been a long road, but the last two years we're really starting to reap the fruit after paying the dues for so many years." 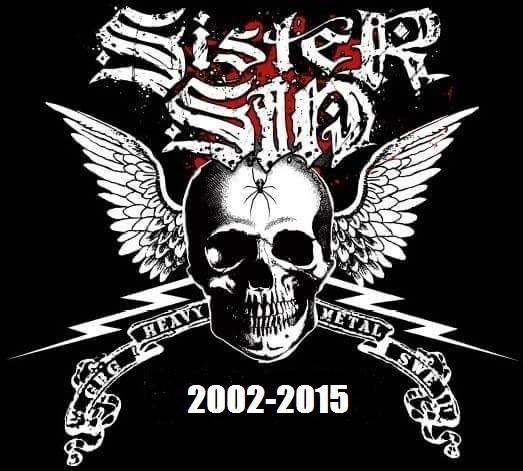