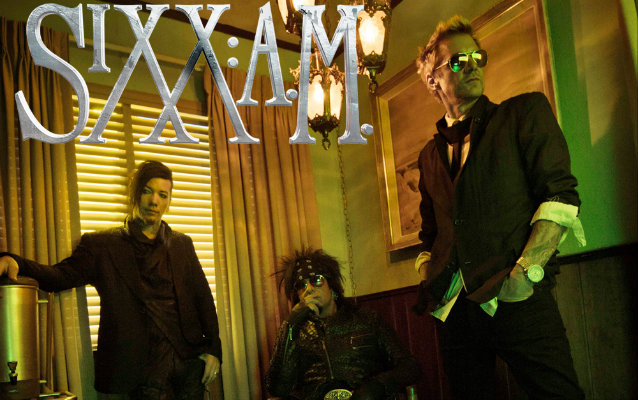 SIXX: A.M.: 'Get Ya Some' Lyric Video Released

SIXX: A.M., the band featuring MÖTLEY CRÜE bassist Nikki Sixx alongside guitarist DJ Ashba and vocalist James Michael, has released the official lyric video for its song "Get Ya Some". The track is taken from SIXX: A.M.'s third album, "Modern Vintage", which was released on October 7, 2014 via Eleven Seven Music.

In an interview with Soundcheck 411, Michael stated about "Get Ya Some": "That's one of my favorite songs on the record; I really love that song. It's a fantastic song to sing and because it's so over the top, the lyric is just so abstract and kinda obscured and that's what I love about it. It's a very fun song to sing, those verses are… I've kinda described them as kinda this low, creepy Tom Waits type of vibe in the verses and then, to me, that chorus explodes into that very Freddie Mercury-esque type of falsetto all over the top, and there's horn sections going on and it's just such a flamboyant song and I love it. It's a fun one to sing and it was a fun one to record."

SIXX: A.M. has hired drummer Dustin Steinke of the Canadian rock band BLEEKER RIDGE to sit behind the kit for its upcoming U.S. tour, which is scheduled to kick off in tonight (Wednesday, April 8) in San Francisco, California.

Based in Orillia, Ontario, BLEEKER RIDGE was previously signed to the Canadian branch of Roadrunner Records and recently completed work on a new album with Michael at the production helm, due later in the year via the Eleven Seven label.

Steinke made his live debut with SIXX: A.M. on February 19 at the Nippon Budokan in Tokyo, Japan as part of Vampark Fest hosted by the rock band VAMPS.

"Get Ya Some" lyric video: