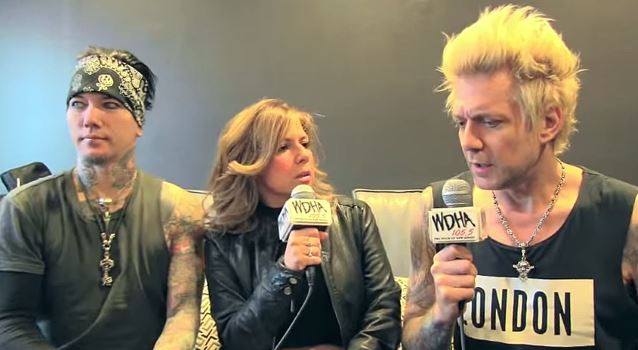 SIXX: A.M.'s JAMES MICHAEL On 'Modern Vintage': 'We Wanted To Find Out Who We Had Become As A Band'

SIXX: A.M. members D.J. Ashba (guitar) and James Michael (vocals) were interviewed by Terrie Carr for the latest edition of "Box Of Rock" on WDHA-FM 105.5 FM, the rock music station licensed to Dover and Morristown, New Jersey. You can now watch the chat below.

Speaking about the songwriting approach for SIXX: A.M.'s third album, last year's "Modern Vintage", James stated: "It was exciting for us, because this is the first record where we didn't have an outside, kind of, peripheral thing, like a book or photography, to base it on. And we did that very intentionally. Because, obviously, when we made [2007's] 'The Heroin Diaries' soundtrack, we were, basically, inspired by, and kind of working music into, this diary that already existed. And then, with [2011's] 'This Is Gonna Hurt', we had Nikki's [Sixx, MÖTLEY CRÜE and SIXX: A.M. bassist] photography and his book, and there were such incredible images, and it kind of conjured up all of these messages and these stories that we were able to be inspired by. But this time around, it was really important to us that we didn't go down that route. We wanted to find out who we had become as a band, and in order to do that, what we did is we went back and looked at all of the records that had inspired us over the years — [from] QUEEN and ELO and ELTON JOHN and [DAVID] BOWIE and all of those artists. And when you look at their careers, they were all very song-based; all of those records were very song-based, very performance-based. And that's the spirit in which we wanted 'Modern Vintage' to be made. And I think we really achieved that, because we really forced ourselves to not settle until we felt the song was truly as… we pushed it as far as it could be pushed."

Sixx revealed in an online posting earlier this month that SIXX: A.M. will enter the studio in late June to begin work on its fourth album, tentatively due in 2016.

SIXX: A.M.'s recently completed "Modern Vintage" tour included a limited number of dates all across North America. While on the road, the prolific band was in the process of writing music for its upcoming CD.