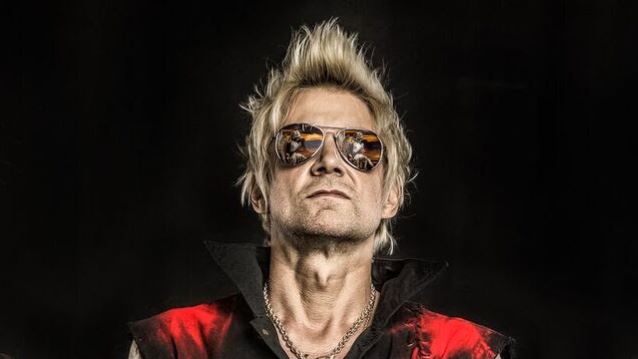 SIXX:A.M. singer James Michael has commented on North Carolina's recently passed HB2, also known as the "bathroom bill," which bans people from using public bathrooms that do not correspond with their biological sex.

During an interview with Big Ric of the Jacksonville, North Carolina radio station Rock 105.5, James was asked for his opinion on the fact that artists like PEARL JAM, Bruce Springsteen, Ringo Starr and BOSTON have canceled North Carolina concerts in order to protest the controversial bill. He responded: "You know, that's a great question, and, obviously, it's been incredibly controversial. How every artist decides to react to that is their own choice. Artists that have decided to cancel shows because of it, that's taking a strong stance and it's saying, 'This is what I believe in.'"

He continued: "I'll be honest with you: on a personal level, it's very disturbing to see this going on in 2016, to even be having these type of conversations. And that's really all I'll say on that at this point, because this isn't really the forum for that."

James added: "Listen, any time that artists realize that they are in a unique position, they've got a microphone, they can say something, they can take a stand, I applaud that."

While North Carolina's HB2 law has led several musicians to boycott the state, others have chosen to use their concerts as a platform against the law — a strategy encouraged by advocacy groups and welcomed by transgender musicians.

In a statement announcing their decision to cancel a show in North Carolina in protest of HB2, the members of PEARL JAM first apologized to ticket holders, saying they know people will be upset and they are "equally frustrated by the situation." They called the bill, "a despicable piece of legislation that encourages discrimination against an entire group of American citizens," then went on to say that they "want America to be a place where no one can be turned away from a business because of who they love or fired from their job for who they are."

The band said they've "communicated with local groups and will be providing them with funds to help facilitate progress on this issue." They promised to keep an eye on the situation in hope that they'll be able to return sometime soon.