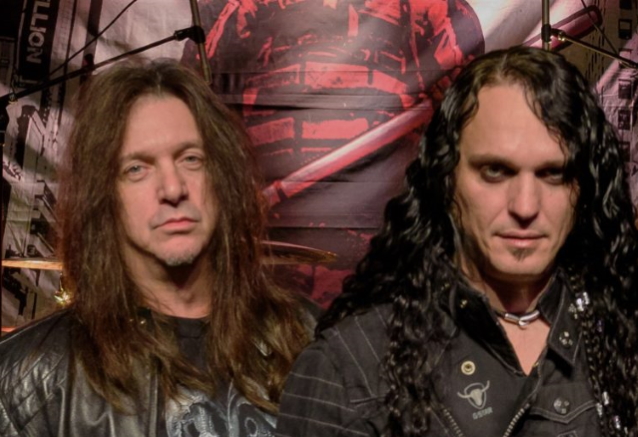 SKID ROW guitarist Dave "Snake" Sabo has once again said that it was "a really difficult decision" to part ways with singer ZP Theart and replace him with ex-H.E.A.T. frontman Erik Grönwall.

SKID ROW played its first show with Grönwall on March 26 at Zappos Theater at Planet Hollywood Resort & Casino in Las Vegas, Nevada as the support act on the rescheduled dates for SCORPIONS' "Sin City Nights" residency. SKID ROW's nine-song set included its new single, "The Gang's All Here", which was made available on March 25. The song is the title track of the band's latest album, which arrived on October 14 via earMUSIC.

Sabo addressed Theart's exit from SKID ROW in a recent interview with Rockin' Metal Revival. He said (as transcribed by BLABBERMOUTH.NET): "We just came back to start playing shows again in February. And before that, we had noticed, prior to the Christmas holidays, we had noticed that the band and ZP were starting to diverge and go in different directions. And we were hoping that by doing this record and moving forward and going to play live shows that maybe those two paths would converge. And unfortunately, they just grew more distant from one another. So we had a really difficult decision to make, because we knew that it couldn't go on like this, and thus we knew that we wouldn't be making the best record possible if we didn't make the change. So in late February, with less than a month to go before the residency with the SCORPIONS and a whole record to record vocals on, we decided to part ways."

Regarding the unfortunate timing of SKID ROW's split with Theart, Sabo said: "On paper, it sounds like the most ridiculous thing in the world to do at that particular point. And I think that we were just throwing caution to the wind and saying, 'You know what? Every path is always difficult in order to reach where you wanna go; it's never easy. So we'll just figure it out.'"

Earlier this month, SKID ROW bassist Rachel Bolan told the "Pat's Soundbytes Unplugged" podcast about the decision to fire Theart: "It's really hard when you have to make a decision that could affect someone else's life, and your life. And it's never taken lightly. But sometimes you just start growing in different directions.

"It's really important to be like-minded with everyone, to have five guys with a common goal, or common goals, whether they're quickly obtainable or you have to work at 'em for a while," Rachel explained. "It's tough and it's a really hard decision to make, but you have to just be, like, 'Okay, this isn't personal. It's business. And we've gotta move on.' So that's what happened. And hopefully someday we'll be having beers together again or whatever and all be buds. But sometimes that doesn't happen that way. But it was never a decision that was taken lightly, for sure."

Sabo previously discussed SKID ROW's split with Theart two months ago in an interview with The Metal Voice. At the time, he said: "It was just we had gotten to a crossroads where we were done with most of the [new SKID ROW] record. I think we had maybe three vocal tracks on the record, but most of the music was done, if not all. And we just realized that we needed to make a change. And it was a harsh realization. There was no arguments or anything like that with ZP; there was no animosity. I think that we both — and when I say 'we', I mean ZP over here and myself, Rachel, Scotti [Hill, guitar] and Rob [Hammersmith, drums] over here — we kind of just knew that the two sides were going in separate directions, to be quite honest."

Grönwall was diagnosed with acute lymphoblastic leukemia in March 2021. Six months later, he announced that he was cancer free after receiving a bone marrow transplant.

In September 2021, four months before he joined SKID ROW, Grönwall released his cover version of the band's classic song "18 And Life" via all streaming platforms.