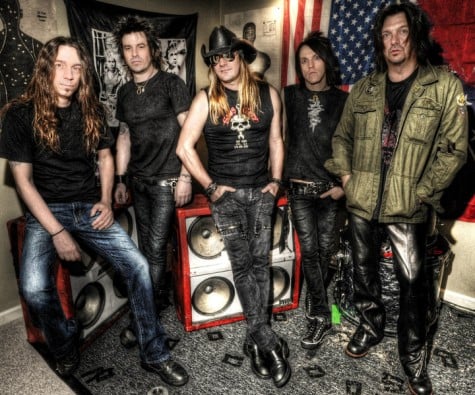 SKID ROW Guitarist: SEBASTIAN BACH 'Really Didn't Write All That Much When He Was In The Band'

John Parks of Legendary Rock Interviews recently conducted an interview with SKID ROW guitarist and DOWN manager Dave "The Snake" Sabo. A couple of excerpts from the chat follow below.

Legendary Rock Interviews: Your name came up a few times in the Sebastian [Bach, ex-SKID ROW singer] interview we just ran and in the interest of fairness we wanted to get ahold of you to give you a chance to respond.

Sabo: First of all, thank you, John, for your patience and diligence in getting this done. I'm sorry I wasn't able to do it sooner. Had I simply been the desk jockey Sebastian described me as, I probably would have been able to get back to you way more quickly. (laughs) One of the first things I noticed in his interview with you was that it was clear he has no idea what it is that I do. (laughs) He talks about me being a manager and not really a touring act. Then he follows it up by saying he's not saying that to be a dick, (laughs) but that's kind of a "dick" thing to say. So, I found a lot of what he said to be humorous and ridiculous at the same time to talk shit about my career. His words kind of diminish what I've been working so hard at doing these last six years in my work. Having said that, I am a guitar player first and foremost and always have been. SKID ROW is my band and I read stuff like that and it dawns on me how much Sebastian doesn't know me or know anything about me even after all these years. That's fine; it's not like we've made an effort to sit there and follow each other's careers since the split, but still….to put down what I do as a manager and say I simply hook up things for Phil Anselmo [DOWN, ex-PANTERA] is kind of demeaning. Rick Sales is his manager. Is that all Rick does is sit around and arrange interviews for Sebastian?? I doubt it, there's a LOT that goes into being an artist manager and that usually falls on a publicist which is something Sebastian should know. At the end of the day, his interview really just added a little humor to my day.

Legendary Rock Interviews: Do you have any personal insight as to how he viewed the breakup? It was mentioned that Sebastian didn't like the material he was presented with?

Sabo: I think we all have our own personal viewpoint or truth as far as what we perceive to be behind the breakup that happened all those years ago. I have a pretty good memory, John, and there's some truth to what he said, but in all honesty, this is what I remember. I remember writing six songs and he can't tell you what those six songs were, because, in all honesty, to the best of my knowledge, he never listened to them. [Manager] Scott McGhee brought them down to his house and said, "At least give these a listen," and Sebastian was so pissed off at us at the time and we were just so distant from each other that it just got really bad to the point of him not even listening to the material. From what I was told, he just threw the tape at Scott and said, "I'm not singing that punk rock bullshit," because that's just how Sebastian viewed Rachel [Bolan, bass]. That reaction of not even bothering to listen to it was what set me in motion as far as thinking maybe it was just time to move on. The thing is, from the first album on, Rachel had always brought that punk rock influence to the band; it was nothing new. It was always Rachel that turned the rest of us on to that stuff and had that RAMONES or PISTOLS influence. Songs like "Piece of Me" or "Bonehead" never would have happened were it not for Rachel's influence.

Legendary Rock Interviews: I love the passion Sebastian has for everything, he's almost exhausting to talk with but it's always fun. Why did things get so bad between Sebastian and the rest of you guys?

Sabo: I think a lot of times what happens a lot times in these situations is that people's idiosyncracies or characters can become masked or hidden when you are experiencing a certain degree of success. When that success starts to fade, certain character issues will come out and rear their head be it in a positive way or a negative way.

Legendary Rock Interviews: You start seeing a different side of someone when you go from playing sold-out arenas to sold-out clubs.

Sabo: Yeah, and to be honest, it never really bothered me, John. I've said this a hundred times in interviews, so it's really no newsflash. It never really bothered me. I can't say I was totally unaffected by it, but not to the degree that it affected Sebastian. It really, really affected him when that happened, at least from my vantage point. It angered him and he tended to act out and create personal issues with the band at that point. The way he treated Rob [Affuso, drums] was particularly awful at that time and I think a lot of it had to do with us being very cognizant of our waning popularity. Sebastian, for some reason, just took that whole thing very, very personally. I think we all did but I know that I never looked at any of our success or acclaim as a birthright or that the world owed me it, I understand that level of fame does not last forever. I looked at every bit of it as an absolute gift and still do to this day, including talking to you. To be able to still be involved in this very tough business is amazing and I am very, very grateful. I think it is a blessing that all five of the original members of SKID ROW are still in the business even though some of the band are doing their own thing. I never got into this to be a "rock star." I wanted to be a guitar player and write songs and the fact that I am still able to do that is incredible. To be able to write songs that people enjoy or relate to is amazing. I truly am thankful to be able to play to any sized audience and accomplish what we continue to do.

Legendary Rock Interviews: Do you question him saying that you and Rachel wanted to control every aspect of the songwriting and that was part of what led him to frustration?

Sabo: That is so untrue. If that were true, then Sebastian's name would not be on any of the album credits for "Subhuman Race" or any of the other things he got credit for, including "Slave To The Grind". The thing is, to the best of my knowledge, Sebastian really didn't write all that much when he was in the band. We always, always operated on the premise that the best idea wins regardless of who writes it. It's true that over the course of the band, Rachel and I had built the ability to be able to write well together. I can't really put a finger on why it happened; it just happened. Steven Tyler and Joe Perry write a lot and the other guys write as well, but just not as much as that combo. Rachel and I have a certain thing and have always interacted very, very well with one another and those songs are result of that relationship built over time. It's not that Sebastian and the other guys didn't attempt to write as much as that they didn't write as much. Some of what they wrote was very, very good and some of it wasn't. I've always been able to write the best with Rachel and that ended up being a lot of the material the band was built upon. We were always open to other guys in the band writing though because we always wanted SKID ROW to be about the band and the bandmembers' input and writing.