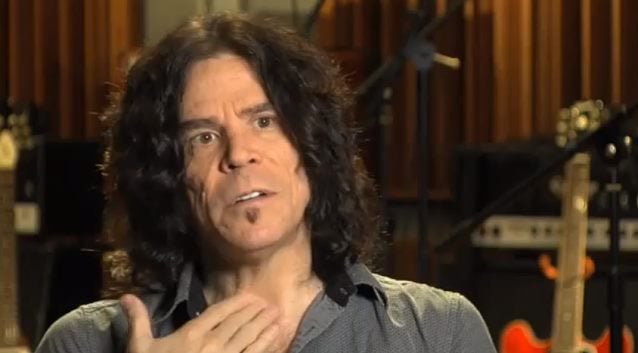 SKID ROW has recruited former TNT vocalist Tony Harnell (pictured) as the band's new lead singer following the departure of the group's frontman of the past 15 years, Johnny Solinger.

During an appearance on today's (Monday, April 6) edition of Eddie Trunk's SiriusXM satellite radio show, "Eddie Trunk Live", SKID ROW guitarist Dave "Snake" Sabo said: "[SKID ROW bassist Rachel Bolan and I] have known Tony for a really, really long time, and always have admired him as a singer and as a front guy. He's a really good guy."

He continued: "I think we all found ourselves kind of in a crossroads, so to speak — at kind of like a… pretty much much serendipitous moment in our lives. And so the thought was in the back of our heads that, 'You know what?! Maybe we should reach out to him.'"

Added Bolan: "Like Snake said, we've been friends with Tony for a long time. And one year, a while ago, we had dinner together. At Christmas, I went up to see the folks in New Jersey, and I went to New York. And Tony and a few other friends, we all had dinner, and we just started talking. And we just… [It was] mutual admiration society. And then, when it came into our mind that we were gonna make a switch, we spoke about Tony, because he just seemed like such a natural fit. And we got in touch with him. He was way into it, [and] we were way into it. We got together [and] we played some songs. It sounded great. We just did some recording together, and it's just… It's, like, wow! This is swesome. It just sounds so natural of a fit. And we're happy. We're very happy. We're happy to have him onboard."

Asked why they decided against reuniting with the vocalist of SKID ROW's classic lineup, Sebastian Bach, Snake said: "It wasn't something that we entertained, to be quite honest. It's just something that, honestly, we didn't even think about. Making a change for us was about getting somebody new."

Added Rachel: "Honestly, all of us, we were, like, 'You know what?! It's not something that we wanna do.' Everyone's got their own thing going on — cool, and that's great, but it wasn't something we even considered. We never once said, 'Well, let's have a reunion.' We were just, like, 'Okay, let's think about Tony.' [Laughs] You know what I mean?! It was just that simple."

He continued: "I've been made to be the bad guy in a lot of stuff, and I've taken a lot of flak [for supposedly being the lone holdout on a reunion], and that's fine — whatever. But it really never entered our minds."

Said Snake: "Rachel's right. This is a group, and he's right. It was something that… We wanted to get somebody new.

"Rachelhas been labeled a bad guy, and that's completely off mark. It shouldn't be that way, because it's our decision. And, for better or for worse, it's decisions that we make…

"We've made decisions in this band because we started this band 28 years ago, and sometimes [our decisions are] not popular, but you have to be happy in doing what you do."

Regarding his addition to SKID ROW, Harnell said in a statement: "I'm so excited and honored to be a part of such a great band with an amazing legacy and legions of faithful fans!

"The guys and I have known each other for many years and this is such a natural fit.

"I look forward to getting out there and playing live together and being a part of making new music and creating our future together. It's time to rock!"

The band will head into the studio this summer to record the third chapter of the "United World Rebellion" trilogy. They will also hit the road for another world tour.

On the topic of Solinger's departure from SKID ROW, Sabo said: "We had a lot of great times together and created a lot of great music. We wish him nothing but the best."

Added Bolan: "Sometimes things just end. People go in different directions and grow apart and you have to make a decision. He will always be our brother."

Solinger announced his departure from SKID ROW earlier today. He explained in a statement: "I have decided to leave SKID ROW to pursue my solo career. The past 15 years has been a great experience and I have appreciated the opportunity to be the lead singer in one of the most prominent bands of the 1990s and share stages with the likes of AEROSMITH, BON JOVI and KISS, performing in front of millions throughout the world. I wish SKID ROW the best of luck in their future pursuits."

Sebastian Bach fronted SKID ROW until 1996, when he was fired. Instead of throwing in the towel, the remaining members took a hiatus and went on to play briefly in a band called OZONE MONDAY.

Harnell's latest exit from TNT took place in early January, a little over a year after he rejoined the group.