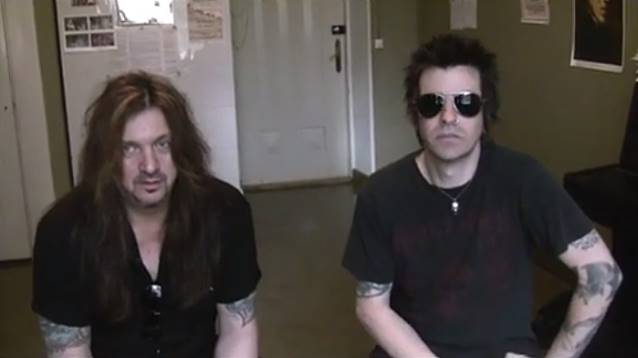 Vince Boncamper conducted an interview with SKID ROW bassist Rachel Bolan and guitarist Dave "Snake" Sabo before the band's June 6 appearance at South Park festival in Tampere, Finland. You can now watch the chat below.

"When we put the band back together, we needed to reintroduce SKID ROW as relevant without relying too much on past success," explains SKID ROW bassist Rachel Bolan. "We wrote songs and hit the road. We sunk our heart and soul into it, letting people know we weren't doing it for lack of something better to do."

2003's "Thickskin" and 2006's "Revolutions Per Minute" were battle plans for hundreds of live shows with new singer Johnny Solinger out front, every night being a hard fought battle to win new fans and convince the old ones. "United World Rebellion - Part 2" is SKID ROW coming out swinging. Rachel and Sabo tapped again into the potent songwriting collaboration that built the band. Sabo says they were eagerly up to the challenge. "We seem to be at our best when we're faced with adversity. It's us against the world again — and by us I mean the band and the fans who stick with us and carry the SKID ROW torch without fail."

New plans came together in an Atlanta recording studio. But it's a different time, a different industry, so they decided to record a series of EPs. "The idea really appealed to me," says Bolan, "especially with the constantly changing musical climate. I like the idea of a steady flow of new music, as opposed to releasing a full-length album then riding it for the next two years."

That guerrilla burst of recording a concise EP fostered a focused intensity that was liberating, says Snake. "The pressure seemed to be lifted. That immediately set me at ease and it became really exciting."

"These songs were from our youth that meant a lot, and as far as we know, no one has covered them, and more important, the songs are still exciting and fit perfectly with the attitude of all other songs on the album."