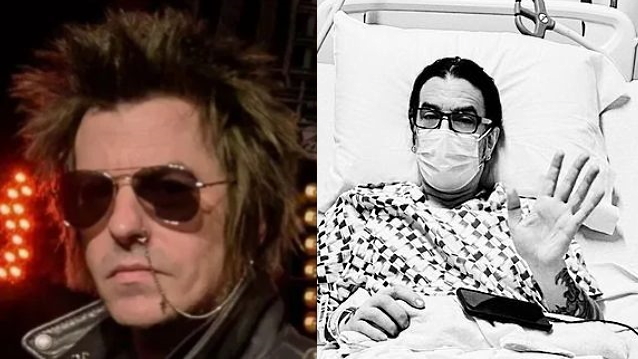 SKID ROW's Rachel Bolan is recovering after having his appendix removed.

The 55-year-old bassist was scheduled to play with his bandmates this past Saturday (January 29) at the Showroom at Talking Stick Resort in Scottsdale, Arizona but had to pull out of the gig after being diagnosed with appendicitis and undergoing surgery. He was replaced at the show by Robbie Crane, who has had stints with Vince Neil's band, RATT and LYNCH MOB, before joining BLACK STAR RIDERS as a full-time member.

Earlier today, Bolan shared an Instagram photo of him lying on a hospital bed, as well as a picture of his cat, and he included the following message: "Hey everyone. I've been getting a lot of DMs asking why I wasn't playing at our recent show of the Live To Rock Tour in Scottsdale, AZ. Welp… last Monday evening I was rushed to the ER with appendicitis and had an appendectomy the next afternoon. Long story short, the surgeon (and a couple other doctors) said that I could under no circumstances play the show or fly. They were concerned about the 3 incisions as well as the possibility of blood clots on an airplane.

"Everyone at St. Thomas midtown were incredible. @ascensionsaintthomas is the goods. I was in good hands from start to finish. And thankfully @leila_1plus was with me the whole time.

"I feel incredible and I'm ready to get back at it.

"I honestly don't know what hurt worse, the appendicitis or missing a show.

"Thanks to Robbie Crane for holding down the bottom end in my absence.

"As you can see Lovey hasn't left my side since I've been home. #heal #heal #rockandroll".