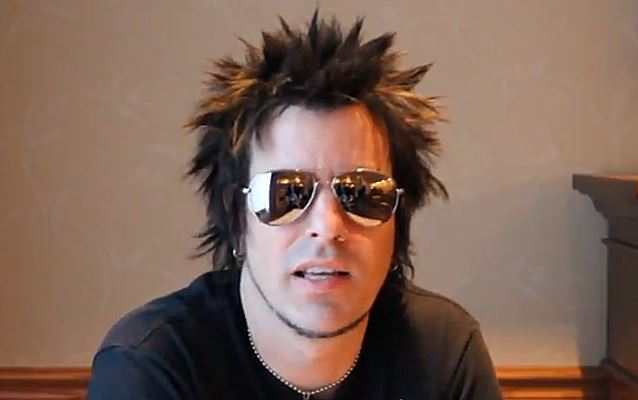 Niclas Müller-Hansen of Sweden's Metalshrine recently conducted an interview with SKID ROW bassist Rachel Bolan. A couple of excerpts from the chat follow below.

Metalshrine: What's the story with the ["United World Rebellion - Chapter One"] EP? Seems like a lot of bands are doing this these days.

Rachel: Well, I don't know why they're doing it, but the reason we're doing it is because we wanted to try something different and try a different angle. We're old school and we've always put out a full-length and then toured for a year and a half or whatever. Technology moves so fast and information overload kinda rules the day, so we went, "Why don't we put together seven songs and put out three chapters over the next two years?" Snake [guitarist Dave Sabo] and I were talking about it and when we told the rest of the band they were into it and our label loved it. The main reason is to put out some new music and tour after that and then more new music and tour after that. Keep everything fresh. And then another reason was the economic factor. It's a lot easier for a SKID ROW fan to put down 6 dollars instead of having to shell out 17 for a full-length. I think some people are still not sure about it, because it is a different way of doing things, but we just did it because we thought it would be a cool idea to have a concept. It was seven years between "Revolutions Per Minute" and "United World Rebellion" because we toured so much, and honestly, one night, I forget who said it, it was Scotti [Hill, guitar] or Snake, "Man, we haven't put out new music in a really long time." And we were, like, "Nah, it's been like two or three years." We started thinking and it was, like, "No, it's been like seven years." [laughs] From a songwriter's standpoint, it's a lot less pressure. It keeps your chops up as a songwriter and there's always something for the band to do; there's never really any down time. Between writing, recording and touring, for this whole year, we've probably only taken two weeks completely off. After our last two shows in Texas in December, we'll take a Christmas break, two weeks off and then back into the studio in the middle of January.

Not counting the new one, do you have a favorite SKID ROW album, where you feel you were firing on all cylinders?

Rachel: "Slave To The Grind" is one of them. It was our only No. 1 album, but that doesn't come into play as far as being one of my favorites. We did a completely 180 sound-wise. We were always a little heavier than the bands we got lumped in with, and when "Slave To The Grind" came out, it was, like, "OK, these guys are more than a hair metal band. They're a hard rock band." When Johnny [Solinger, vocals] joined the band and we did "Thickskin", that album was, like, "OK, we're making a statement." First of all, the name, having thick skin. We knew we were gonna have to endure a bunch of shit, but we were all so involved in that album, Johnny, Snake, me and Scotti. We were so involved in every facet of that record. We would fall asleep at Snake's house. I got divorced during the record and then moved into Snake's house. Johnny broke up with his chick during the record and moved into Snake's house. We lived in Snake's house, and it was just, like, wake up, make some coffee, go down to the studio down in the rehearsal room and write. We lived that record. That's the only one of our records, except the new one, that I listen to. It's very self-indulgent and I feel funny some times. It's in the iPod and I listen to it in my truck and it's so weird. That's kinda like a faux-pas, you know. I'm listening to it, getting into it and cranking it. [laughs] If I had to pick a favorite, it's "Thickskin". I just love that record. Actually, Snake and I were down in Burbank, writing for the new record and we were just chillin' and we put it in and played it so loud, the neighbors complained. [laughs] It was fucking great!

Rachel: No. [laughs] I have no desire. I'm sure everybody will tell me about it. [laughs]

Any plans on writing your own book?

Rachel: Yeah, I'm actually working with a guy. Talk about something exhausting! He's a buddy of mine and we've been working for two years. He's up in Boston and we spent about a week together. The first day we did about six hours and my head was pounding just trying to remember all. Mine's gonna be all the positive stuff that happened to me and friends around me and the people I've been lucky enough to meet. It's gonna be a very positive book with funny stories. I'm not there to talk dirt about anybody. It's not my style. I started working on it and just got so tired, and the next day, I woke up with a headache and I was, like, "Dude, we're gonna have to not do it for six hours." So we did it for two hours and the next day it was one hour. [laughs] It's really hard to remember 25 years' worth of stuff. He throws some questions at me every now and then. It's gonna be strictly memoirs, and so far it's pretty fucking funny. I'm psyched. [laughs]