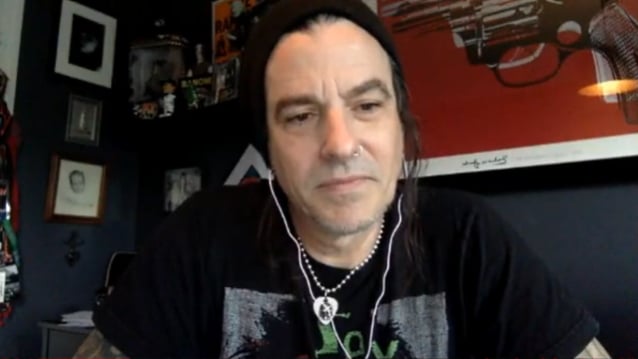 SKID ROW's RACHEL BOLAN: 'Maybe Everyone In The World Shouldn't Voice Their Opinion'

SKID ROW bassist Rachel Bolan spoke to Chris Akin about the lyrical inspiration for "World's On Fire", the final track on the band's upcoming album, "The Gang's All Here", which will arrive on October 14 via earMUSIC. The group recorded most of the LP in Nashville, Tennessee with producer Nick Raskulinecz, who has previously worked with FOO FIGHTERS, STONE SOUR, HALESTORM, EVANESCENCE, RUSH and ALICE IN CHAINS, among many others.

Bolan said about the song (as transcribed by BLABBERMOUTH.NET): "It's not so much political as it is just standing back and looking at things. And it's, like, you know, maybe everyone in the world shouldn't voice their opinion. With all the shit that's going on, maybe flapping your mouth is making shit worse. So that's where the lyrics just came out of.

"That was the last song that we wrote [for the album], I believe. And that was during rehearsals. Or we went back into pre-production, 'cause Nick was, like, 'You guys need more songs.' So we went back in and we wrote 'Not Dead Yet' and 'World's On Fire'. [Guitarist] Snake [Dave Sabo] had a riff. He was, like, 'Here's what I have.' Then Nick kind of pulled it apart and rearranged it and then I started writing lyrics. And we both had some melody ideas.

"It was just feelings. And although it was last minute, the more I listen to it, I'm, like, I didn't realize we were making such a statement when we were writing the song. That was truly where our head was at as we were writing those lyrics. It's just, like, 'Man, let's just stop this shit. Just stop. Just shut up.' Like the old saying, 'Stop and smell the roses.' My mom would always say that. When she saw that I was going… I'd get off tour and just work at home and then go on another tour. She was, like, 'You've gotta just chill and stop and smell the roses and just enjoy life a little bit.' And my dad was a big… He'd always be, like, 'If you talk too much, sooner or later you're gonna say stupid shit.' Just like, 'Say what you've gotta say and you're done. Don't keep talking just to hear your own voice.' And I feel completely the same — when people start going on about stuff, whatever the topic is, I'm, like, 'Oh my God. I wish they'd shut up.' [Laughs] My dad would always say too, 'When you're at a party and you start talking about the weather, you've run out of things to talk about. So go home.'"

Singer Erik Grönwall joined SKID ROW in January as the replacement for ZP Theart, who had been in the group for more than six years. Theart played his final gig with SKID ROW in February before being officially given the boot.