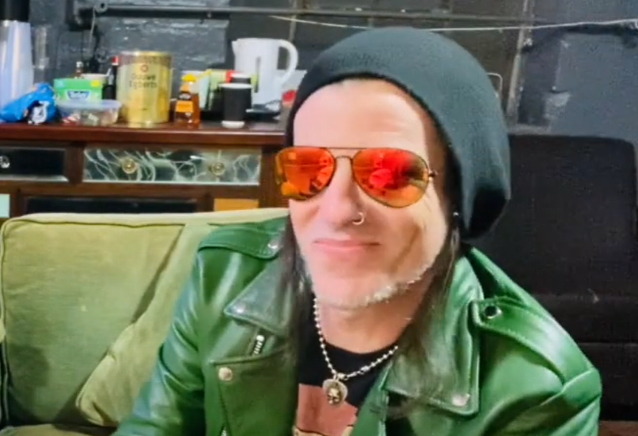 SKID ROW's RACHEL BOLAN Offers Life Advice: 'You Just Have To Force Yourself, If Need Be, To Think Positive'

In a new interview with Caz Parker of MMH Radio, SKID ROW bassist Rachel Bolan was asked if he had a piece of advice for people to keep them "positive and happy." He responded (as transcribed by BLABBERMOUTH.NET): "I'm living proof… I know sometimes, and especially in the last two years, life got really, really difficult at times, and things in America changed a lot, whether it's political or just because of the damn coronavirus and all that. Things got bad, at least here and there, I think for everyone at some point. After all that, for me personally to come out with the one thing that is my lifeblood, is this band, one of the things, and to come out just kind of on top of things and in such a positive light, I think it could happen for everyone. So there are gonna be times for everybody, I think, that it just seems like you almost feel like giving up — giving up hope or giving up whatever. But you really have to stay the course and you really have to just convince yourself, 'You know what? It could be worse.' Someone who is teaching me that every day is [new SKID ROW singer] Erik [Grönwall, who was diagnosed with acute lymphoblastic leukemia in March 2021], when I hear him tell stories about the illness that he went through and just his mindset through the whole thing. And I'm thinking of the stuff that gets me down and I'm, like, this doesn't hold a candle to what he went through. And the way he just approached it, he was just swinging. And that taught me a lot. And that kind of illustrated the point in my own head or illustrated the point that I'm saying now, is, like, yeah, sometimes things are really bad, but you just have to force yourself, if need be, to just think positive and think on the good side and what might be on the other side of this pothole that life has thrown in front of you."

In September 2021, Grönwall announced that he was cancer free after receiving a bone marrow transplant one month earlier. That same month, Grönwall released his cover version of "18 And Life" via all streaming platforms.