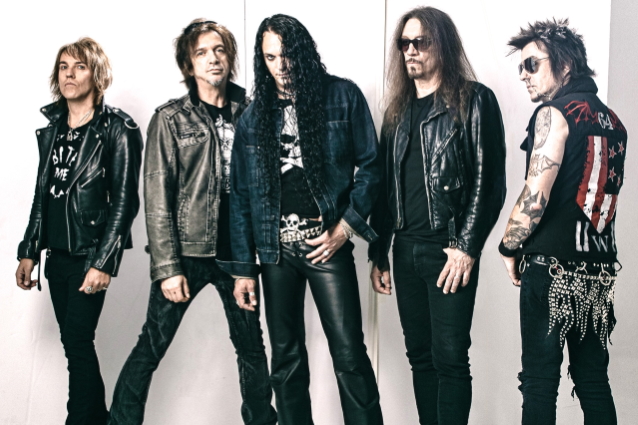 SKID ROW's RACHEL BOLAN On Long-Awaited New Album: 'We're At The Point Where We Think We Wanna Write Some More Songs'

On Friday (May 1),SKID ROW bassist Rachel Bolan spoke to We Are Hear's "Raise Your Horns With Lzzy Hale" — hosted by HALESTORM's Lzzy Hale — about the progress of the recording sessions for the final chapter of SKID ROW's "United World Rebellion" trilogy. The disc is being tracked at a Nashville, Tennessee studio with producer Michael Wagener, who also helmed the group's 1989 self-titled debut and 1991's "Slave To The Grind".

Bolan said (see video below): "We're still working on it. We did a bunch of stuff with Michael Wagener. We were in the mixing phase and went on the road, and he had to start another [project], and all this shit happened," referring to the coronavirus pandemic. "But now we're at the point where we think we wanna write some more songs. It's gonna be maybe a pivotal album for us. Everyone's really anxious to hear ZP on record. So we want it to be great — as great as possible. And I'm really liking it so far. So, it was supposed be out around this summer, but, obviously, that's not gonna happen. We'll get back in once we can all get together and we'll start writing some more and recording some more and finish that sucker up."

SKID ROW is scheduled to join forces with RATT, Tom Keifer and SLAUGHTER for a U.S. tour this summer.