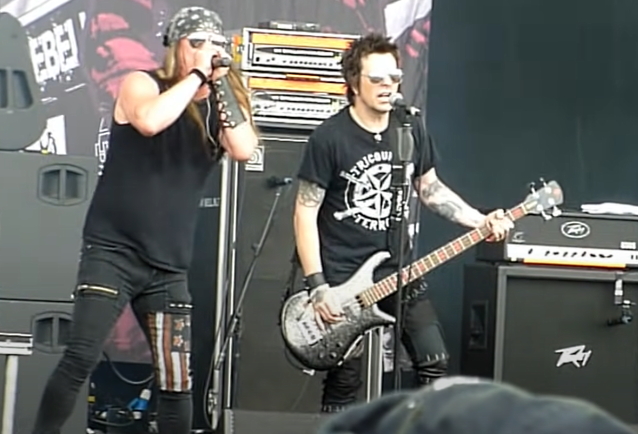 SKID ROW's RACHEL BOLAN Thinks About Late Singer JOHNNY SOLINGER 'All The Time': 'I Miss Him'

SKID ROW bassist Rachel Bolan has paid tribute to the band's late singer Johnny Solinger who died in June 2021 at the age of 55. His passing came a little over a month after he announced he was suffering from liver failure.

In a new interview with On The Road To Rock, Rachel said about Solinger (as transcribed by BLABBERMOUTH.NET): "We had a lot of fun — we had a lot of fun together. He was seeing stuff that we had seen in the past and he was experiencing things that we had already experienced, so it was cool from that standpoint. We all became very close knit and had a lot of fun and we did a lot of shows together. We did that whole KISS tour thinking we were only gonna be on one leg and they asked us to stay and stay. And it was really cool, man. We [made some great] music together, and sadly, towards the end [of his time with the band], certain temptations just kind of took him over. Without going into too much detail, for a while there it started to really get in the way of stuff. And I don't mean that in a cold and callous way; I mean, he was getting in his own way. And it was a shame. And we tried and pointed things out to him, and then finally we just had to make a move. And from what I heard, he was doing well for a while, and then he wasn't. And sadly, he passed. I think about him all the time, and I do miss him — all the guys do. 'Cause we experienced a lot together and we broke a lot of new ground together. And it's sad that he's gone. It wasn't completely unexpected, but nonetheless it was super… very, very sad. Very sad."

Last December, SKID ROW guitarist Dave "Snake" Sabo reflected on Solinger's death during an appearance on SiriusXM's "Trunk Nation With Eddie Trunk", saying: "It's a terrible, terrible tragedy. It's a really big loss. It was really hard when we had heard about it. We had heard that he was sick. We didn't understand to what degree. But we reached out to him and we had some communication with him.

"Johnny was one of those guys — he just had a sweet, sweet soul about him," Snake continued. "[He was] never malicious, always kind-hearted, always with a smile on his face. And he was a good guy. I mean, we were together for nearly 15 years, and we were friends throughout the whole thing. Our separation of the band and him was simply because it just wasn't working anymore, just from a standpoint of where we were headed as a band and where he kind of was headed as a singer. But there was no hate there at all; to be honest with you, [we had] nothing but love for the guy. And I don't say that because he's passed away; I said that when we split up. I mean, there was absolutely no animosity whatsoever. And he's gonna be missed, 'cause he is a part of the history of this band — a big part. And I'm grateful for the time that he gave us and allowing us to make records with him and together. And I'm fond of those records — I'm fond of the EPs and 'Thickskin' and 'Revolutions Per Minute'. That's a big part of our history that helped us to get here where we are now. So I'll always be thankful for him and I'll always miss him. And I appreciate you bringing that up, because he needs to be talked about more often. I feel he kind of gets lost in the sauce, and that's not fair to him or his memory."

Solinger, who was a member of SKID ROW from 1999 to 2015, appearing on the "Thickskin" and "Revolutions Per Minute" albums, as well as the "United World Rebellion" and "Rise Of The Damnation Army" EPs, revealed his diagnosis in a social media update on May 8, 2021. He wrote: "It is with a heavy heart I must let everyone know what's going on with me and my health. I have been hospitalized for over the last month. I have been diagnosed with liver failure. And prognosis is not so good. As with most musicians I do not have health insurance and it’s very difficult to get proper care without it.

"I am currently under at least seven different medications and I need to have my abdomen drained off fluid that gets accumulated every couple of days. I have lost a lot of strength and will require physical therapy as well.

"At the moment, I am looking into putting together some sort of fundraiser to help with the medical bills and with the palliative care I will need in the coming months. I am kindly asking those of you who could help put this together to step forward. I would not be asking you all this if I didn't really need the help, but sadly this is where I'm at.

"I appreciate and want you all to keep me in your thoughts and send me all the healing vibes you can, but I get exhausted easily so I will ask you to please not call or text unless absolutely necessary. But please, if you can help in this difficult time, I will wholeheartedly appreciate it.

"Love you all. I will post a link where you can donate very soon but I wanted to update you on my condition."

Solinger was fired by SKID ROW in April 2015 and replaced by TNT singer Tony Harnell. Tony quit the group only eight months later, and was succeeded by the South African-born, British-based singer ZP Theart, who previously fronted DRAGONFORCE, TANK and I AM I. Theart was fired from SKID ROW in February and was replaced by Erik Grönwall, who was previously a member of the Swedish hard rock band H.E.A.T.

Bolan later confirmed that Solinger was kicked out of the band, contradicting the singer's claim that he "decided to leave SKID ROW to pursue [his] solo career."

Asked what led to Solinger's departure from SKID ROW, Rachel said: "It was evident. There were certain things going on out on the road that kind of set us thinking… Things had been going on for a little bit. And, you know, I'm not here to say anything bad about the guy.

"At certain times, you just get the feeling someone isn't putting a hundred percent into things," he added. "And SKID ROW is very important to the rest of us. And we wanted to carry on with quality performances and quality songs, so we decided to make a change."

Asked if there was ever a time where they felt things were "clicking" and "100 percent right" between Solinger and the rest of the band, Rachel told "Eddie Trunk Live": "We were clicking big time. I thought we made a lot of great music together. And even with [the series of] EPs, when we were in the studio, we were making great music. Snake [guitarist Dave Sabo] and I would write, and everyone came in and really sunk in. I think it was when we were in the studio that it really became evident that we all didn't have the same heart and soul… We weren't all putting the same heart and soul into it. And it's just one of those things, man. It's rough to make a decision like this, but we did."

Added Snake: "This has nothing to do with Johnny not being a good person; he's a really good person, and we all got along well. There's no animosity at all from our end. And these are terrible decisions to make, man. They're awful. The guy's been with us for fifteen years, and we saw a lot of miles of road together, and I feel extremely fortunate to have spent that time in a band with him. And he's a great singer and he's gonna be fine. He's gonna pursue his solo stuff, I guess, and that's what he should do."

On the topic of how Solinger reacted to being fired from SKID ROW, Snake said: "There was no screaming and shouting. We were both very respectful to one another. And we should be. I mean, like I said, we've traveled a lot of miles together, and this is not something that is easy in any way, but yet it's something that was necessary."

Asked how parting ways with Solinger was different to the split with Sebastian Bach in 1996, Rachel said: "That was a completely different situation. There was a lot of bad blood there, and… Yeah, it was a completely different situation. This is something, like Snake said, there's no animosity. It's just… We all didn't have our eyes on the same prize at this point, and it interfered. It interfered with moving forward. And that's why we made a change."