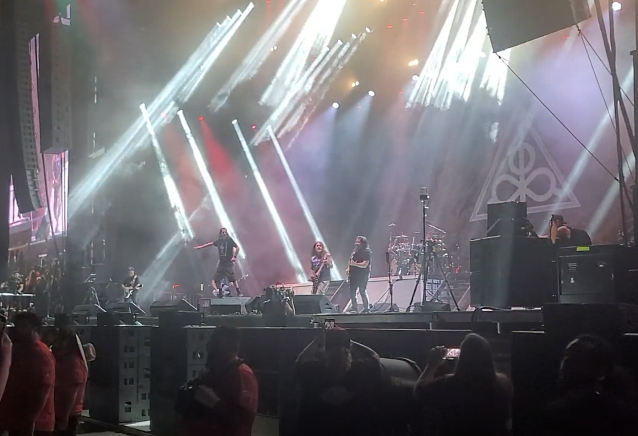 Watch: LAMB OF GOD Performs With Three Guitarists For First Time Ever

LAMB OF GOD singer Randy Blythe introduced Demmel to the crowd by saying: "We're gonna bring a friend of ours out. He's from the Bay Area. He's played with us once or twice. He'll play with us on this last song. Make some noise for Phil Demmel. We're going full LYNYRD SKYNYRD — three motherfucking guitars for the first time ever, right here at Aftershock."

Earlier today, Demmel shared a photo of him hugging LAMB OF GOD guitarist Mark Morton onstage at last night's concert, and he included the following message: "I've had many life memories made on onstage and last night was another. Thanks to @lambofgod for having me onstage at the local @aftershockfestival set last night. It would be the only chance for my son to see me perform with them and they were the ever gracious hosts. Although it looks like I just accepted a marriage proposal from @mark.duane.morton I'm probably thanking him (and @theartcruz )for saving me from being torched from the Pyro cues I didn't ask about! All top dudes on top of their game. The Demmel Dudes are forever gracious."

Demmel filled in for LAMB OF GOD guitarist Willie Adler on nearly a dozen of the band's European shows in August. Prior to that, Demmel stepped in for Adler during LOG's January appearance on the ShipRocked cruise and in May for the Canadian portion of LAMB OF GOD's "The Metal Tour Of The Year" with MEGADETH.

At the Bloodstock Open Air festival in August, Demmel was asked by TotalRock if Adler's COVID-19 vaccination status is the reason Phil has been filling in for the LAMB OF GOD guitarist at some of the Virginia metal band's recent non-U.S. concerts. He responded: "I think Willie's just in a spot right now, and it's not really my spot to say, but I get the vibe that he's… I don't even think I should talk about it. I don't think it's my spot to say anything about Will. But he's making his decisions, and I am the contingent. So here I am."

LAMB OF GOD singer Randy Blythe discussed Demmel's involvement with the band during an interview with Bloodstock TV's Oran O'Beirne at Bloodstock Open Air. After O'Beirne noted how talented Demmel is to be able to step in on a moment's notice, Blythe said: "We make him put in work, though, to be fair. The guitar parts aren't easy. We are playing a song tonight, 'The Faded Line', and that's a song that hasn't been in our set for a while because some guys are, like, 'Oh, this is hard.' And it's, like, 'No. We need to do this.' And even he was just, like, 'Oh. We've gotta learn that. That's a fucked up riff.' But we saw Phil fill in for SLAYER on, like, two days' notice in Europe at the end of the SLAYER tour, 'cause Gary Holt's dad was passing away. R.I.P. And Phil came over and killed it. We've known him for many years. There's never really been any question of whether he can do it. He's a phenomenally talented guy."