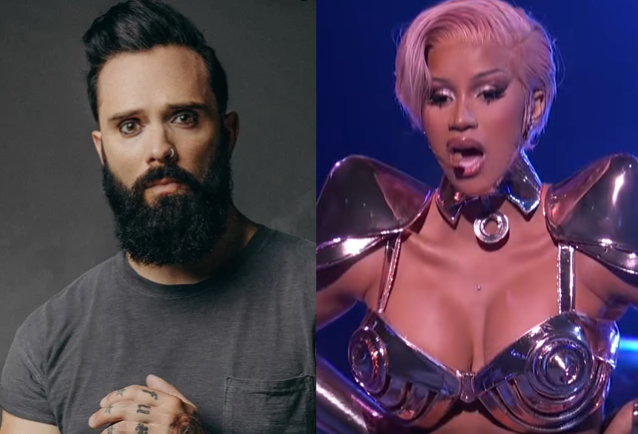 John Cooper, the frontman and bassist for the Grammy-nominated Christian rock band SKILLET, has blasted Cardi B and Megan Thee Stallion's performance of their hit song "WAP" during Sunday's Grammy Awards.

Earlier today, the 45-year-old Cooper, who defines himself as "conservative in ideology," posted an episode of his "Cooper Stuff" video podcast in which he addressed Cardi B and Megan Thee Stallion's Grammy appearance and suggested that it was a good example of how humanity has always been dexterous at confusing evil with good.

He said in part (as transcribed by BLABBERMOUTH.NET): "We're living in a world right now where there are certain Dr. Seuss books that you cannot sell on eBay," referring to the fact that six Dr. Seuss books will no longer be published because they "portray people in ways that are hurtful and wrong," according to the business that preserves the author's legacy. "They are just too much for anybody to even be allowed to buy; they're being yanked down from all the bookstores and stuff like that. It's just too much; it's too evil. So you can't go on eBay and buy it — too evil. But you can, and must, applaud the sexual degradation of Cardi B and Megan Thee Stallion simulating sex together on the Grammys. This is the perfect example. You must celebrate it. In fact, if you don't celebrate it, then you're actually a bad person, and you kind of, like, don't love people. You're actually not nice. This is the perfect example, you guys."

Cooper went on to read chapter 5 verse 20 of the book of Isaiah, which states: "Woe to those who call evil good, and good evil." He said: "'I don't think that would ever really happen.' Really? It's happening right now. It's been happening in America for the last few years like crazy — especially the last five years, especially during the last year.

"Why would anybody ever call evil good and good evil? It's simple: because they just redefine the terms. The question is, who is going to define what is good, and who is gonna define what is evil?

"Every dictator in history says that what they were doing was good," he continued. "That's what they believe. If you go back and you read some of Hitler's speeches, he's, like, 'I'm gonna set people free — free from the bondage of the Ten Commandments.' In his mind, he's a liberator. It's always like that, you guys. All you do is you just redefine evil and you redefine good. That's what's happening right now on the Grammys.

"But the biggest difference that is not the same is that 20 years ago, when Madonna did it — in fact, Madonna was really pushed into stardom from a performance like this. I can't remember if it was Grammys or was it MTV Awards. I don't really remember, but I watched a documentary on it a few years ago on Netflix; I can't remember what it was. She did this performance where she was simulating self-sex and rolling all around on the stage. The difference was this: nobody said that she was virtuous for doing it. That's a major difference, you guys. She was doing it because it was a climate of hedonism — it was a climate of sex, drugs [and] rock and roll. That's the motto of my generation and the generation before me — sex, drugs, rock and roll. It's a rebellion. It was a revolt against Christian values, traditional values, even just Western values in general. The family values — it was a revolt against traditional sexuality. But it wasn't because they were virtuous. Nobody looked at Madonna and was, like, 'She's such a virtuous person. I really want my daughter to live this way.' Nobody did that. That's the difference. Madonna was doing it and getting famous because she was courageous and brave to do something that was like shock rock. Now it's not just shock rock. Now it's, like, yeah, we're redefining what virtuous is. So we're taking paganism, and we're not just saying, 'Yeah, I'm gonna get famous 'cause I'm willing to be into paganism and hedonism and idolatry and sexual degradation,' and this and that and the other. No — we're saying, 'I'm doing all those things because I know what virtue is. I know what morality is. I define morality.' That is what it means to call evil good, and good evil."