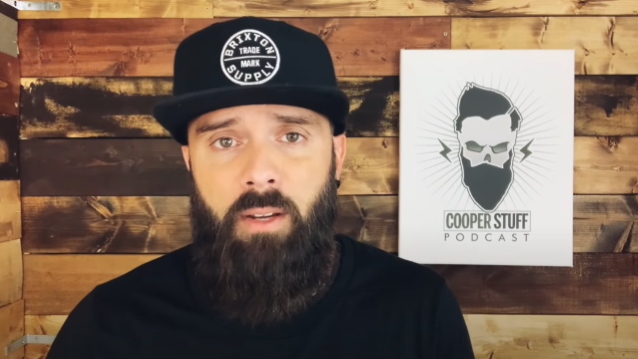 John Cooper, the frontman and bassist for the Grammy-nominated Christian rock band SKILLET, has once again railed against COVID-19 vaccine mandates, saying it is "absolutely insane" that the government is requiring vaccines as a way to contain the virus outbreak, which has killed nearly 800,000 people in the U.S.

The 46-year-old vocalist/bassist, who previously publicly revealed that he was unvaccinated, discussed his views on the COVID-19 vaccines during the final 2021 installment of his "Cooper Stuff" video podcast.

He said in part (as transcribed by BLABBERMOUTH.NET): "It's a new year. I don't know where we're at. I don't know if it's gonna get worse or if, all of a sudden, people are gonna wake up and realize how insane this is, how absolutely insane it is that we are pushing mandates — all over the whole world, by the way — at a time when countries are getting… I think America is, like, 70 percent vaccinated now. Are we close to 70 percent vaccinated? I can't remember. Some of these countries in Europe are 80, 90 percent vaccinated. Some of them have, in terms of adults, 98 percent vaccination rates for people over 15 or 16. At a time when a lot of these countries, basically, for all intents and purposes, should have, quote, herd immunity, which is a whole other discussion, because they have those populations vaccinated but the rates of COVID are still going up, it is absolute insanity to say, 'Well, the answer then has to be mandated vaccines. You're not allowed to come out of your house.'"

"But the question just remains: when you have 70, 80, 90, 96 percent vaccinated people and your rates of COVID are still going up, why are people asking that question?" he added. "Are people gonna wake up to this finally? I really just don't know. I honestly don't know.

"Last year, I felt like certainly it was gonna get worse before it gets better. I don't think we're out of it yet. I think we're still going to watch a little bit of this getting worse, to be honest with you. But I like to think that we're at least on the backside."

Last month, the Memphis, Tennessee-born Cooper, who lives in Kenosha, Wisconsin, said that COVID-19 vaccine mandates are "much more about tyranny than they are actually keeping people safe."

During the summer, Cooper opened up about his reluctance to wear masks, saying: "The issue of the mask wearing, to me, is nothing more than theater. It is making me jump into an unreality, something that I do not believe, just to acquiesce to either the overlords — overlords meaning government, Big Tech [Editor's note: A name given to the five largest and most dominant companies in the information technology industry of the United States — namely Google (Alphabet),Apple, Facebook, Amazon and Microsoft], big business, big media, whatever — to acquiesce to what they want me to do. Even though I know that it's not true, but I'm gonna play the game. And every time I put my mask on, I know that I'm doing something that I do not believe in. In other words, I'm being forced to lie… I'm being forced to jump into something I don't believe, and I'm living by a lie — I'm living by a lie that this mask is actually gonna keep me safe from all harm. To acquiesce to the government, which says that I'm believing something that I know that I don't believe. So now I'm basically living in a fantasy world. That frightens me. And every time I put that mask on, that's basically what I think. I know I'm doing this, I know it's show, I know it's theater, I know my overlords don't even believe in it, because if they did, they wouldn't be breaking all of their own rules."

In the U.S., more than 61% of the population are currently fully vaccinated against the coronavirus, while more than 72% have received at least one shot, according to data from the CDC.

More than 797,000 people have died from the coronavirus in the U.S.