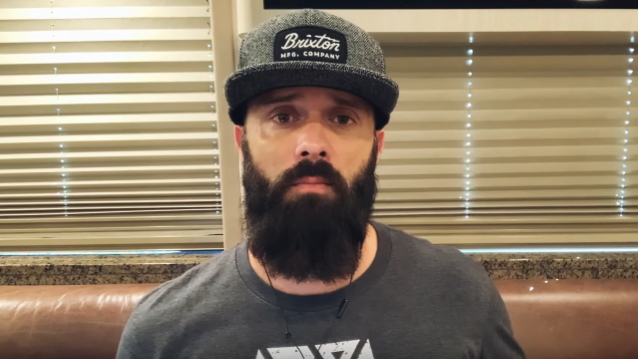 SKILLET's JOHN COOPER Explains Why He Has An 'Issue' With Mask Wearing: 'To Me, It Is Nothing More Than Theater'

John Cooper, the frontman and bassist for the Grammy-nominated Christian rock band SKILLET, says that he has an issue with mask wearing during the COVID-19 pandemic, calling the subject of face coverings "nothing more than theater."

During the latest episode of his "Cooper Stuff" podcast, the Memphis, Tennessee-born Cooper, who lives in Kenosha, Wisconsin, addressed the fact that certain people, including conservative Christians, object to masks or outright refuse to wear them.

He said (as transcribed by BLABBERMOUTH.NET): "This is extremely unprecedented times. I think people are genuinely trying to figure out, 'What does Jesus want me to do?' 'What is the best way to show my faith in these absolutely insane times that we live in?' I think people are really trying to do their best. I think there are some things that we need to be gracious towards one another on.

"I think that your conscience — your personal conscience before the Lord — has to come into play in a really big way in these issues," he continued. "If you feel like that the best thing that you can do unto the Lord is to get a vaccine, I would say go for it. That's between you and the Lord. That's up to you. Go for it. Absolutely no judgment from me. If you want to get a vaccine and wear a mask, if that's what you feel like you need to do, that's up to you. If you wanna wear a mask, up to you. I feel this is an issue of, like, hey, everybody can make kind of their own decisions here, because it's kind of a weird time we live in. What I don't like is on these very complicated issues when the dogmatism comes in of, 'If you are a believer, you will do this,' when there's so much to talk about."

Cooper then went on to discuss his own reluctance to wear masks, saying: "The issue of the mask wearing, to me, is nothing more than theater. It is making me jump into an unreality, something that I do not believe, just to acquiesce to either the overlords — overlords meaning government, Big Tech [Editor's note: A name given to the five largest and most dominant companies in the information technology industry of the United States — namely Google (Alphabet),Apple, Facebook, Amazon and Microsoft], big business, big media, whatever — to acquiesce to what they want me to do. Even though I know that it's not true, but I'm gonna play the game. And every time I put my mask on, I know that I'm doing something that I do not believe in. In other words, I'm being forced to lie… I'm being forced to jump into something I don't believe, and I'm living by a lie — I'm living by a lie that this mask is actually gonna keep me safe from all harm. To acquiesce to the government, which says that I'm believing something that I know that I don't believe. So now I'm basically living in a fantasy world. That frightens me. And every time I put that mask on, that's basically what I think. I know I'm doing this, I know it's show, I know it's theater, I know my overlords don't even believe in it, because if they did, they wouldn't be breaking all of their own rules."

Cooper touched upon the constitutional rights argument on "Cooper Stuff", saying: "I can't think of anything in this situation more loving — and I believe in a true biblical sense of the word 'love' — I can't think of anything more loving in this situation than to protect those individual rights. Not because we're a bunch of braggers, not because we don't care about anybody else, but because people fought and bled and died in order for us to have some sort of individual autonomy in the biblical sphere of authority. God gives us these rights. I think it's more loving to protect those rights and fight against the totalitarianism. I'm much more scared of totalitarianism than COVID or cancer, for that matter. Because totalitarianism and tyranny will destroy nations, will destroy cultures. A hundred and fifty million people were killed in the last century from various dictatorships and totalitarianisms and dictators and that sort of thing. I am much more frightened of that, because where you move into is this idea of 'safeism.' And once you move into 'safeism,' when you are willing to trade, 'I will give you my rights, government. I will give you control of my life if you just keep me safe. If you just keep me safe from all harm, I'll give it all over to you.' That's scary. That is a scary, scary place. And mark my words, you will see incredible oppression if people are willing to give up everything they have in order for the government to take care of them."