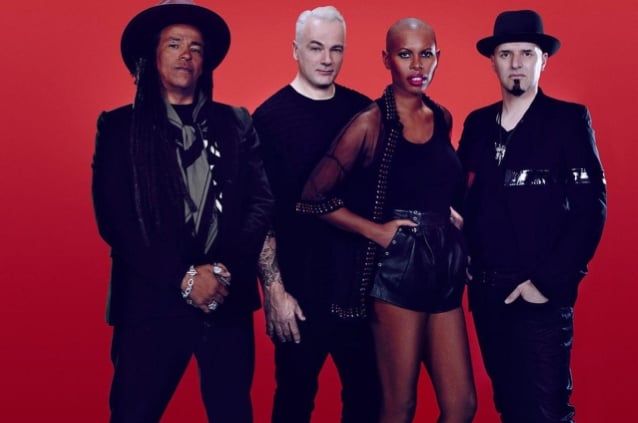 SKUNK ANANSIE Releases Music Video For 'What You Do For Love'

British rockers SKUNK ANANSIE have released the official music video for their new single, "What You Do For Love". The clip for the band's first new song in three years includes footage from the recent European leg of SKUNK ANANSIE's "[email protected]" tour, along with the video of the group recording the track in a London studio.

Speaking about the song, vocalist Skin said: "The hardest songs to write are political ones which is why we always try to avoid them. They're supposed to just instantaneously spill out of you due to pure vexation, or they sound insincere and you fall into tired old clichés. This is one of those moments of rage. Love always seems to be the reason why people do hateful things, which I've never been able to understand."

Formed in 1994, the band exuded a strong sense of individuality from the start, shunning the Britpop mould of white 20-something men with guitars for a glorious mix of race, gender, sexuality, culture and music influences. Untethered by any scene allegiances, they powered ahead, forming their own wild sound and image: agile, gritty, politically-charged "clit rock"; a throw-away term coined by Skin.

Their notorious live presence earned them a record deal on just their second gig, and later on saw them become the first international multi-racial band to tour South Africa, where they played three sold-out arena shows. Their first Glastonbury slot came just over a year since formation, and only four years later the band were invited back to headline the festival.

Establishing themselves as one of the most unique rock bands of the past three decades, their career has seen them score numerous Top 40 singles and Top 10 albums, sell millions of albums around the world, share stages with David Bowie and U2, and sing "Happy Birthday" to Nelson Mandela with Stevie Wonder, Nina Simone and Michael Jackson.