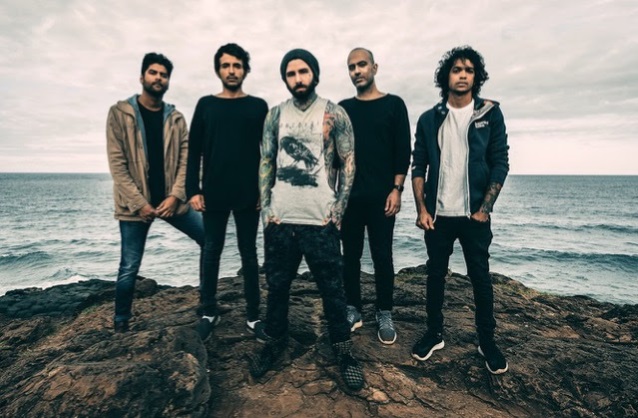 Indian/American progressive metal band SKYHARBOR has signed a worldwide deal with Entertainment One/Good Fight Music. The group is in the studio with producer Forrester Savell (KARNIVOOL, TWELVE FOOT NINJA, DEAD LETTER CIRCUS) working on its new full-length album, "Sunshine Dust". The follow-up to 2014's "Guiding Lights" will be released later in the year.

"It goes without saying that we're stoked as all hell to have found our new home with Entertainment One and Good Fight Music," says guitarist Keshav Dhar. "They have been key in bringing to life our vision for where we want this band to go, and we're delighted to be able to bring our new record out to the world through them."

SVP of Metal, eOne Music's Scott Givens adds: "Entertainment One is committed to developing and breaking new rock/metal music talent. SKYHARBOR has already laid the foundation for an amazing future with us and we are all excited to get to work."

SKYHARBOR will support its new labelmates THE CONTORTIONIST on a North American run named "Clairvoyant North America 2018". Dhar continues: "Our first-ever North American tour was with THE CONTORTIONIST in 2015, and we became great friends on that run. We've been gunning for a chance to tour with them again ever since, and it couldn't have come at a better time. It's going to be a truly memorable experience."

From a file on a computer sitting in New Delhi to a full-fledged touring band with members from around the world formed over the Internet, SKYHARBOR has defied convention every step of the way. The debut album, "Blinding White Noise", was released worldwide in 2012 to critical acclaim and earned the band a dedicated fan following across the globe. Since then, SKYHARBOR has been performing regularly around the world and making waves with its distinctive brand of sweeping, ethereal prog-rock, releasing "Guiding Lights" in 2014 after a wildly successful crowdfunding campaign.

After a brief patch of turbulence that saw new frontman Eric Emery and drummer Aditya Ashok solidify the band's lineup, SKYHARBOR embarked on a series of tours around the world, covering North America, Europe and India.