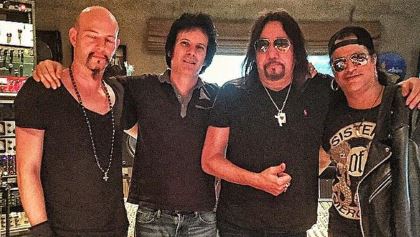 Former GUNS N' ROSES guitarist Slash has recorded a guest appearance on a cover version of a THIN LIZZY classic for original KISS axeman Ace Frehley's forthcoming covers album, due later in the year via SPV/Steamhammer.

A photo of Slash in the studio with Ace's drummer Matt Starr and their engineer can be seen below.

Slash wrote on Twitter: "Had a really fun, live session with @Ace_Frehley last night jamming on a #ThinLizzy tune for his new covers album. Good times!"

Frehley told Billboard.com earlier in the year about his covers disc: "The album's going to be about my influences. I'm probably going to do a ROLLING STONES song, a WHO song, possibly a LED ZEPPELIN song, maybe a BEATLES song. Stuff from bands that I grew up on and greatly influenced me. Those are the songs I'd redo, besides vintage KISS stuff and a FREHLEY'S COMET track."

The set will "probably" include Frehley's versions of the KISS classics "Cold Gin" and "Parasite". "On KISS records, I'm not singing lead. So I'm going to sing lead on them like I do live so there's [studio tracks] out there with me," Ace said.

Frehley said that he has approached Lita Ford, Slash and Mike McCready (PEARL JAM) about making guest appearances on the CD. "I was actually going to ask [KISS bassist/vocalist] Gene Simmons to play bass on a track and sing with me. I haven't gotten to that stage yet," he said.

With all the back-and-forth in the media between Ace and his former KISS bandmates over the past year, VH1 Radio Network asked Frehley if he thinks Gene would accept his invitation to appear on Ace's covers album.

"I think he'd consider it," Ace said. "I don't know if he'd do it. Maybe [KISS guitarist/vocalist] Paul [Stanley] won't let him. Who knows?"