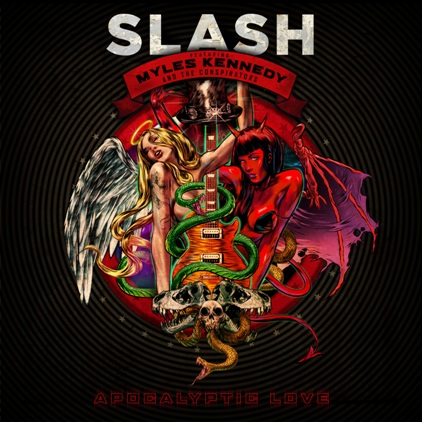 WMMR's Pierre Robert and Matt Cord conducted an interview with Slash and Myles Kennedy at the annual MMRBQ on May 20 at Susquehanna Bank Center in Camden, New Jersey. You can now watch the chat below.

Slash's second solo album, "Apocalyptic Love", is likely to sell between 30,000 and 35,000 copies in the United States in its first week of release, according to industry web site Hits Daily Double. The estimate was based on one-day sales reports compiled after the record arrived in stores on May 22 via Slash's own label Dik Hayd International distributed through EMI.

In the U.K., "Apocalyptic Love" was released on May 21 in exclusive Classic Rock Fan Pack form — providing a unique collectable package containing the studio album with bonus tracks alongside a specially created magazine with unseen behind-the-scenes content put together by Classic Rock. The Fan Pack format also comes with free gifts, including a pin badge and artwork poster and is available to buy via more than 2000 retail outlets on newsstands nationally as well as the traditional high street and online music retailers. Roadrunner Records simultaneously released the record digitally. The standard physical release of the Slash album will follow through Roadrunner Records on June 18.