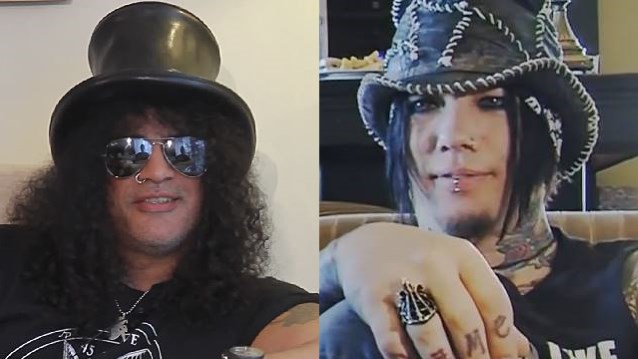 Asked in a question-and-answer session with the French Slash forum if he is friends with any of the guitarists in the current lineup of GUNS N' ROSES, Slash — who was part of GUNS N' ROSES' classic lineup — responded: "I've never met any of them except for the guy who wears the top hat [Editor's note: Presumably referring to DJ Ashba]. I can't remember his name."

Slash, along with fellow former GUNS N' ROSES members Gilby Clarke, Duff McKagan, Steven Adler and Matt Sorum, performed three "Appetite For Destruction" songs with Myles Kennedy at the band's Rock And Roll Hall Of Fame induction ceremony in April 2012 in Cleveland, Ohio. Kennedy, who handles lead vocals in Slash's solo band and ALTER BRIDGE, sang "Mr. Brownstone", "Sweet Child O' Mine" and "Paradise City", with "Use Your Illusion"-era member Sorum sitting behind the drum kit on "Brownstone" and the man he replaced in GN'R, Adler, pounding the skins for the other two songs.

Speaking to UnskinnyPop.com in May 2014, Ashba talked about what he feels is "the most misunderstood thing" about him. He said: "I don't really read a whole lot about myself other than what is on my social media stuff. People seem to know more about me than I know about me. I think people confuse me joining GUNS N' ROSES… I mean, I saw a few comments that said, 'Hey, he's trying to be Slash.' Well, that's not true in any way. I think he is his own person and I have a lot of respect for what he's done for the band as far as his guitar work and stuff. I grew up loving the band and that whole thing is kind of weird to me. I am obviously my own person and would do what anyone would do in my position and just keep the music alive, do whatever you can do to stay as true to that music as you possibly can, and I think that is the respectful thing to do. In my mind, that is where I'm coming from."

GUNS N' ROSES' last studio album, "Chinese Democracy", got mixed reviews and was a relative flop, moving less than one million copies in the U.S. since its November 2008 release.

Any chances of a new album, of course, depend on singer Axl Rose. It took Rose 13 years to finish "Chinese Democracy", burning through hundreds of thousands of dollars, multiple producers, every last remaining original member of the group and a few replacements before he was done.