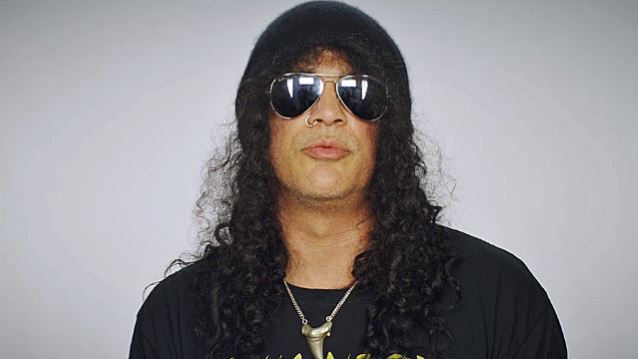 Rumors of a reunion of GUNS N' ROSES' classic lineup have been flaring up since Slash revealed in August that he and singer Axl Rose had reconciled after 19 years.

Slash was asked about the possibility of a reunion last May on "CBS This Morning" and said, "Never say never," a surprising response given that he had been saying for some time that such an event was unlikely to happen.

Slash elaborated on the program: "I've got to be careful what I say there. I mean, if everybody wanted to do it and do it for the right reasons, I think the fans would love it. I think it might be fun at some point to try and do that."

The closest anyone came to a GUNS reunion in recent memory was when the band was inducted into the Rock And Roll Hall Of Fame in 2012. Three original members of the band, including Slash, bassist Duff McKagan and drummer Steven Adler, showed up, but Axl and guitarist Izzy Stradlin were no-shows.