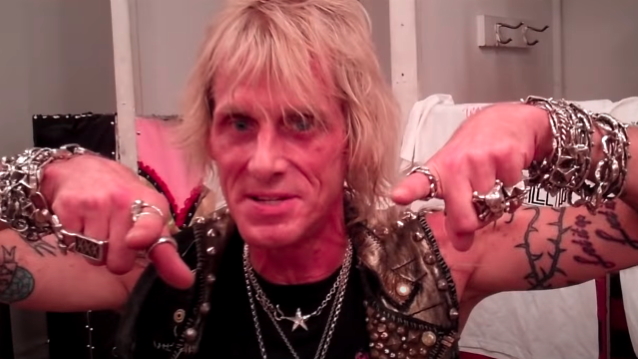 Duff McKagan (GUNS N' ROSES),Slash (GUNS N' ROSES),Sebastian Bach (SKID ROW),Nikki Sixx (MÖTLEY CRÜE),Alissa White-Gluz (ARCH ENEMY) and CRO-MAGS are among the rockers who have reacted on social media to the passing of Jimmy Webb, the iconic manager at famed New York clothing store Trash And Vaudeville, who died Tuesday morning at the age of 62. The cause of death was reportedly cancer.

"Jimmy Webb was a great friend of mine," Bach wrote. "I bought every pair of Cuban-heeled boots that I wore from 1987 – 2011 at Trash & Vaudeville from Jimmy. Rest in peace brother, we will miss you. You came from the time of true rock and roll."

McKagan added: "The sweetest man and pure punk f*cking rock n roll. Jimmy has SUCH a story, and my family and I feel honored and loved to be a small part of his triumphant tale. We love you Jimmy…we will miss you, brother."

Punk rock legend Henry Rollins told the New York Post that he played Buffalo not long ago and an ailing Webb took the train up to surprise him backstage. "He traveled four hours and came in with a bouquet of flowers," Rollins recounted. "He said he just wanted to see me. That was a total Jimmy move. We put the flowers on the tour bus and hoped they wouldn't get knocked over when we pulled out of a truck stop. Jimmy Webb was one of the sweetest human beings I ever met."

Webb grew up in upstate New York and moved to New York City in 1975. He spent more than a decade and a half working at Trash And Vaudeville, which he dubbed "rock and roll heaven," before opening his own boutique, I Need More, named after a song by Iggy Pop, three years ago.

"Without a doubt, I have a dream come true life," Webb once said. "I live every moment and I taste everything in it. I taste it, I smell it, I feel it ... Dreams do come true."

My pal...the sweetest man and pure punk f*cking rock n roll. Jimmy has SUCH a story, and my family and I feel honored and loved to be a small part of his triumphant tale. We love you Jimmy...we will miss you brother. @ixneedxmore @jimmywebbnyc

Jimmy was a RocknRoll renaissance man. A true survivor & inspiration.His heart was always full of love and he let the world know it.We will all miss his special spirit. NYC will never feel the same without Jimmy’s smile waiting for you as you entered his store. RIP Rockstar https://t.co/ntG9Pvo4Fk

I would like to officially tell 2020 to fuck off now. But I know Jimmy wouldn’t approve of such negativity. You will be sorely missed. 💔

This is a very difficult one. Jimmy Webb IS New York City to me. The city and his name go hand in hand. I cannot imagine being in the city and there not being a Jimmy Webb. Jimmy has been a member of our tight knit family since the very beginning. Jimmy rode the bus with us across America. Across Europe. It is inconceivable that he is gone. If Jimmy took you in you were immediately his family. He took us in like strays. Jimmy was my family. I don’t know how to live in a world without Jimmy Webb so I chose to believe he will always with me. He will watch over St. Marks and the Lower East Side forever after. The Angel Of New York City. We miss you, Jimmy. We love you. I am thankful that I was fortunate enough to be alive at a time when Jimmy Webb walked the Earth. What a gift you were to so many of us. You are with us always. Thank you for all that you gave us. Forever heartbroken. #jimmywebb @jimmywebbnyc @ixneedxmore

We lost a great rock n roll human being today, Jimmy you will be sorely missed. As you are so loved so much by so many, you will live on in our hearts forever. You are truly one of a kind. & there will never be another like you. A perfect storm of love, joy, tragedy, grit, RnR & soul, the world is a lesser place in your absence. RIP Jimmy. Give em hell! #JimmyWebb#IWantMore iiii]; )'

Jimmy Webb was a great friend of mine. I bought every pair of Cuban heeled boots that I wore from 1987 - 2011 at Trash & Vaudeville from Jimmy. Rest in peace brother we will miss you. You came from the time of true rock and roll 👢❤ https://t.co/WYSPy77GAO

The death of Jimmy Webb will be breaking many hearts today. He was a beautiful man of rare soul and grace with a huge heart. Unforgettable Character. Sweet Temperament. We will all remember!!xxxxx pic.twitter.com/40YyuTZJcX

RIP JIMMY WEBB💔 He was a long time friend and supporter of The 69 Eyes. Here with a set of @villeakseli art. One of the last real Lower East Side rockers and characters. 😰 J69 X pic.twitter.com/KPJRQLJ9yd

Jimmy Webb lived and breathed rock ‘n’ roll like no one I’ve ever known in the 50 years I’ve been on my journey. Did he play an instrument? No. Did he sing?No. Did he exude rock ‘n’ roll ? Yes. A profoundly important element in the history & mystery of NYC R n R..Rock in Peace! pic.twitter.com/GyMyj1RNbn

Our friend, Jimmy Webb, a legend and a St. Marks St. legend, stylist of the punks, famous and not, has passed. I’m so very sad and we’ll all miss your energetic, warm soul. The city will not be the same without you. pic.twitter.com/RI06gv8f0C

Steve & I are so sad to hear of Jimmy Webb’s passing. He was the coolest, nicest guy. We loved him. RIP to a real rockstar & NYC fashion icon pic.twitter.com/wwDRiba75j

R.I.P. to My & All of our Brother #jimmywebb I can't Fuqn believe this Right Now! Ty for All the Love u Always Gave me thru out all these years JW! Damn! Gonna miss ya man...Mt🙏💯❤😪 pic.twitter.com/bLEIjbX5Y7

We’re sure gonna miss our good pal, #JimmyWebb. He was so generous with his kindness. I will never forget.
I think the best thing to do to honor him this evening is turn on Iggy Pop and dance. #INeedMorepic.twitter.com/4TfBmBuMfV

RIP Jimmy Webb, one of the nicest and most rock & roll people I’ve ever met https://t.co/xB2jVdbyyV

End of (another) era. Jimmy was a St Marks fixture along with his beloved Trash & Vaudeville. When Trash closed he held on because HE NEEDED MORE..and we were all grateful for his die hard integrity. Jimmy you will be missed by many. #RIP#jimmywebb#ineedmore#trashandvaudevillepic.twitter.com/Q45yfZLtv8

Rest In Peace #JimmyWebb ⭐️
You were the fucking coolest

Rest In Peace #JimmyWebb ⭐️
You were the fucking coolest