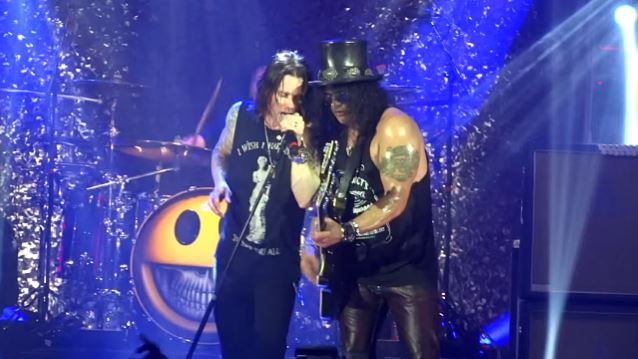 On November 7, 2014, SLASH FEATURING MYLES KENNEDY AND THE CONSPIRATORS and BIFFY CLYRO played an intimate show for fans at O2 Academy in Glasgow, United Kingdom ahead of the 2014 MTV EMA, one of the biggest global music events of the year. The intimate gig was filmed for MTV.

Slash South America has uploaded video footage of Slash's entire concert. Check it out below.

As previously reported, Slash will be honored with the prestigious Les Paul Award during the 30th annual NAMM Technical Excellence & Creativity Awards on Saturday, January 24 in Anaheim, California.

The Les Paul Award was named for the inventor and musician Lester William Polsfuss, known as Les Paul, who pioneered the solid-body electric guitar, overdubbing and delay effects that helped transform rock and roll. Previous honorees include Todd Rundgren, Peter Gabriel and Neil Young. The comedian Sinbad will host the evening's festivities.

The NAMM Awards were created to honor people and companies across 30 categories for excellency in audio technology and production.

Slash is enjoying a vibrant solo career these days with SLASH FEATURING MYLES KENNEDY AND THE CONSPIRATORS. On September 16, 2014, the band released "World On Fire", which marks Slash's third straight album to debut in the Top 10. The title track hit No. 1 on rock radio.