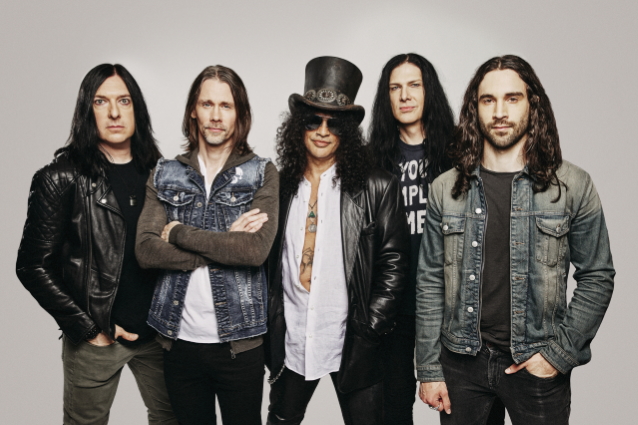 SLASH FEATURING MYLES KENNEDY & THE CONSPIRATORS will celebrate the release of their new album, "4", by performing it its entirety on Friday, February 11. The "Live At Studios 60" concert event will stream live and free on the Slash YouTube and Facebook at 11 a.m. Pacific / 2 p.m. Eastern / 7 p.m. GMT. The concert will be immediately followed by a live question-and-answer afterparty with Slash exclusively on YouTube Premium.

To join the afterparty and live Q&A, fans can sign up for a free, YouTube Premium one-month trial at this location.

A trailer for "Live At Studios 60" can be found below.

As previously reported, SLASH FEATURING MYLES KENNEDY & THE CONSPIRATORS will perform their new single, "The River Is Rising", this Wednesday, February 2 on "Jimmy Kimmel Live!" Tune in at 11:35 p.m. ET/PT / 10:35 p.m. CT on ABC TV and Hulu to watch Slash sit down with host Jimmy Kimmel for an interview and catch the band hit the stage to perform "The River Is Rising" on live TV for the first time.