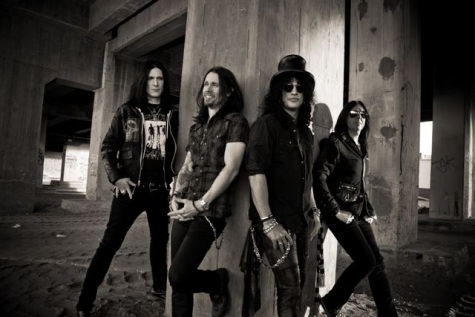 On Saturday, May 19, Slash featuring Myles Kennedy and THE CONSPIRATORS — Myles Kennedy (vocals),Brent Fitz (drums) and Todd Kerns (bass) — will appear on DIRECTV's The Audience Network for the season premiere of "Guitar Center Sessions" airing at 8:00 p.m. ET. For the first time ever, Slash and the band will perform an acoustic set spanning new songs and classics. Slash and Myles Kennedy also sit down for an intimate behind the scenes interview with renowned music journalist and "Guitar Center Sessions" host Nic Harcourt.

A preview clip of the song "Beggars & Hangers-On" (originally recorded by SLASH'S SNAKEPIT) is available below.

Slash will release his second solo album, "Apocalyptic Love", on May 22 via his own label Dik Hayd International distributed through EMI.

"Apocalyptic Love" was recorded like a live performance record where the band was all set up in a big room at Barefoot. The liberated feel of "Apocalyptic Love" is evident throughout the LP's 13 songs, as is the genuine chemistry between Slash and Myles.

The evolution of their creative relationship went full throttle since the two first joined forces on Slash's 2010 debut solo release where the ALTER BRIDGE frontman lent his pipes to the cavalcade of venerable guest vocalists which included Iggy Pop, Ian Astbury and Ozzy Osbourne. Slash's debut landed on The Billboard 200 chart at #3 (#1 on the Rock chart, #1 on the Independent chart, and #1 on the Hard Music chart). Digitally, it became the #1 overall digital album and hit #1 on iTunes in 13 countries. "I contacted him out of the blue, sent him one of the songs I was working on which turned out later to be 'Starlight'," Slash says. After Myles contributed his ideas and sent it back to Slash, creative forces congealed. "I went, ‘Wow, that's really good," recalls Slash. "We flew Myles out to track it and this unassuming mild mannered guy shows up, similar in demeanor to me, sort of quiet, not really explosive in personality. He then nailed 'Back from Cali' and it was like, 'Would you like to do a tour with me?' I was so happy when he accepted the offer." For the Spokane-born lead singer, the gig was an opportunity to expand his personal portfolio while exploring some musical synergy with an artist he'd long admired. Over the next 18 months, Slash featuring Myles Kennedy and THE CONSPIRATORS — Myles Kennedy (vocals),Brent Fitz (drums) and Todd Kerns (bass) — toured the world on the album evolving into the tight-knit rock group they are today.