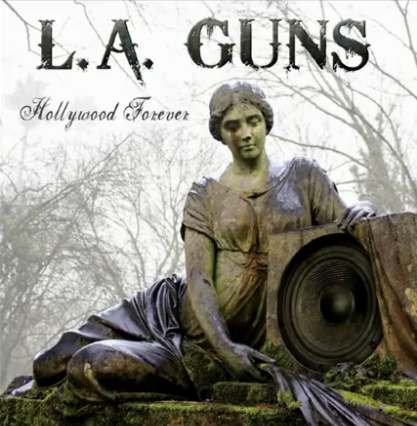 A one-minute teaser for "You Better Not Love Me", the new video from L.A. GUNS — featuring Phil Lewis, Steve Riley, Stacey Blades and Scotty Griffin — can be seen below. The song comes off L.A. GUNS' new album, "Hollywood Forever", which is scheduled for release on June 5 via via Cleopatra Records. The CD was recorded with legendary producer, and old friend, Andy Johns, who has previously worked with LED ZEPPELIN, THE ROLLING STONES, CINDERELLA and VAN HALEN, and who collaborated with L.A. GUNS on their last three albums. A CD and vinyl release, as well as bonus tracks available only on iTunes, is planned. A nine-month world tour following the release is also in the works.

L.A. GUNS spent a few days in Los Angeles shooting three videos to support the record, and will make the track "You Better Not Love Me" available online soon. Videos for "Requiem (Hollywood Forever)" and "Aranga Nigre" were also filmed. Videographer Jack Foster was behind the lens for the shoot at the legendary Circus Disco in Hollywood. With an LED logo in the background, the band meshed theatrics with its expected rock energy on the big stage. Later, additional scenes were filmed in L.A.'s colorful Little Mexico and the landmark Hollywood Forever cemetery. Stacey Blades said, "It was a blast hammin' it up in a big venue and stage for the cameras." He added, "We are so excited about the new album coming out and videos to boot. 2012 is the year of L.A.GUNS!"

Fan-filmed video footage of L.A. GUNS performing "You Better Not Love Me" on April 20 at Rathaussaal in Telfs, Austria can be seen below.

In other news, L.A. GUNS taped an exclusive interview with VH1 Classic's "That Metal Show" on March 17. They discussed moving above and beyond past conflicts and the exciting events of 2012, including the album and upcoming tour. The episode will air May 19.

Phil Lewis' L.A. GUNS is not to be confused with the Tracii Guns-led version of the group, which is also continuing to record and perform under the L.A. GUNS moniker.

"You Better Not Love Me" video teaser:

"You Better Not Love Me" performance: