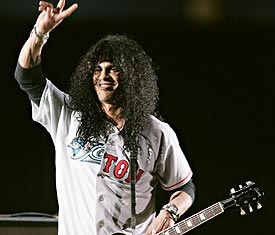 Shi Davidi of The Canadian Press has issued the following report:

Slash was doing a show with his band VELVET REVOLVER in Toronto recently when he decided to play a couple of bars from "O Canada".

"The whole place went nuts," the rock guitarist recalled Friday. "I was like 'OK settle down, just wait for April 8.' I just gave them a taste of it. It was cool though, they started singing the words and I was overwhelmed by that." The fans went even wilder for the real thing Friday, when the former GUNS N' ROSES star performed the national anthems before the Toronto Blue Jays' home opener against the Boston Red Sox.

A near-capacity crowd began chanting "We want Slash," and roared wildly as he played the "Star Spangled Banner" and "O Canada" on his electric guitar by the pitcher's mound (photo). They yelled even louder when he added a riff to the end of "O Canada".

In the days preceding the show, Jays president Paul Godfrey said reaction to Slash was mixed, with younger fans pumped and older people giving him the thumbs down. But Slash was respectful in the renditions, not straying from the tunes while giving both a hard-rock twist.

"I've listened to a bunch of different versions of ('O Canada') just to make sure I try and stay true to the melody that was written in 18-something-or-other," he said.

The performance wasn't unprecedented for Slash, who is famous for strumming wildly with a cigarette hanging from his mouth and wild streams of black curls jetting out from under a top hat. He has also played the "Star Spangled Banner" before a Los Angeles Lakers game.

"That was pretty nerve-wracking, just standing there in the middle of centre court, just having everybody stare at you all by yourself," he said. "This situation is even bigger, I'm pretty frozen at this point. Once you start playing you're fine."

About two hours before he played the anthems, Slash practiced by the mound as players, fans and the Trailer Park Boys, who later fought each other before Bubbles threw the ceremonial first pitch, looked on excitedly.

"I used to listen to them all the time," said Hinske. "It's pretty cool."

Zaun later got Slash to autograph two guitars in exchange for a catcher's mask.