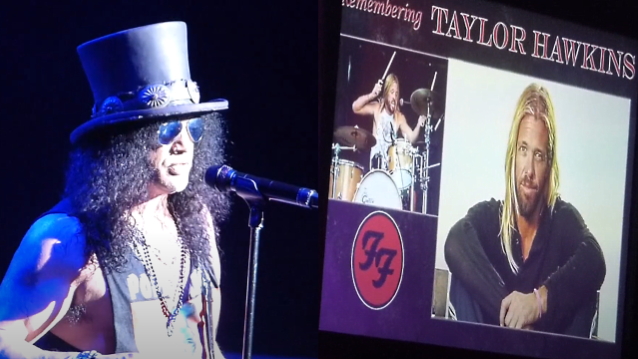 Slash paid tribute to Taylor Hawkins during his concert with SLASH FEATURING MYLES KENNEDY AND THE CONSPIRATORS in Orlando, Florida Saturday night (March 26),calling the late FOO FIGHTERS drummer "a great guy" and "a sweetheart."

The 56-year-old GUNS N' ROSES guitarist addressed Hawkins's tragic passing prior to launching into the song "Starlight" at Hard Rock Live. He told the audience: "I'm sure most of you are aware that we lost a really close friend of ours last night — Taylor Hawkins, the drummer of the FOO FIGHTERS. First of all, he was a great fucking guy — a fucking sweetheart. He was a really good friend and a kickass drummer. [We're] completely crushed that we've lost him. So we wanna do a song tonight and dedicate it to him. So we're gonna play something we haven't played actually on this whole tour, but we're gonna do it tonight. This is called 'Starlight'."