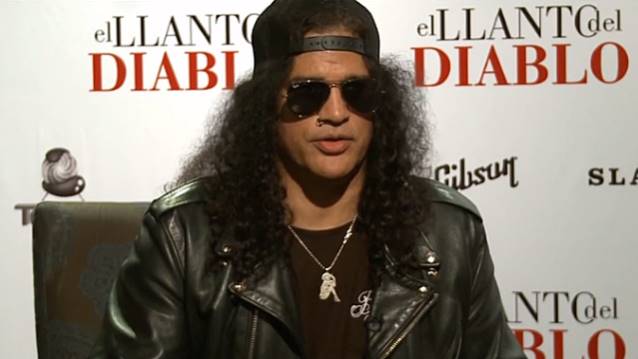 SLASH: 'The Only People That Obsess About GUNS N' ROSES Is Media'

Former GUNS N' ROSES guitarist Slash says that he rarely looks back on his past achievements and insists that he prefers to "keep pushing forward" while living "in the moment."

Slash, who continues to get asked about his former band despite the fact that he hasn't spoken to GN'R lead singer Axl Rose since his 1996 departure, doesn't blame the fans for their continued interest in the classic GUNS N' ROSES lineup, telling the Ottawa Citizen, "Really, the only people that obsess about GUNS N' ROSES is media. I think it's just lack of imagination."

He continues: "I'm an in-the-moment person. I don't look too far in the future and I definitely don't draw on past stuff. Whatever it is that you're doing right this second, just do that and do the best you can at it. And just keep pushing forward, always forward."

Slash will release his third solo album, "World On Fire", on September 15 via Slash's own label Dik Hayd International distributed through Roadrunner Records (Europe, Middle East, Africa and Latin America). Joining him in the studio once again were Todd Kerns on bass, Brent Fitz on drums and ALTER BRIDGE singer Myles Kennedy.

Slash describes his current tour to the Ottawa Citizen as "definitely better" for him than some of the wild days of the past.

"What I intended to do from the get-go was never really that complicated," he adds. "But success and money and all that kind of stuff, it just makes life complicated."

Slash was also full of praise for Kennedy, saying, "Myles is great. I don't think I've ever met a singer who works as hard as he does."

The guitarist, who has amassed album sales of over 100 million copies and landed in the No. 2 spot, behind Jimi Hendrix, on Time magazine's "The Ten Best Electric Guitar Players of All-Time" list, says that despite all the accolades and commercial success he "was never aspiring to be a rock star. I never fantasized about it when I was a kid. I didn't play air guitar. I always loved that moment where the equipment was on the stage and before the band came on, and, you know, looking at the guitars … that was always really exciting to me."